Can You Really Earn Money With Free Bitcoin Faucet Sites 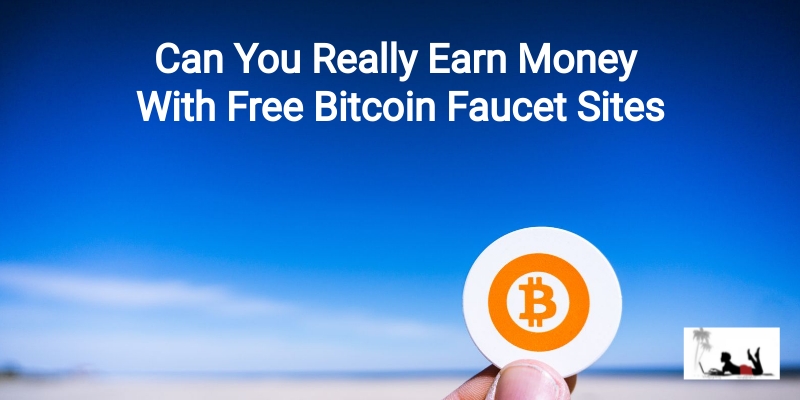 I guess if you’re reading this article then you’ve come across Bitcoin faucet sites before. You’ve wondered if they’re a legitimate way to make some extra money, or are they just one of those low quality opportunities that come and go.

So, can you really earn money with free Bitcoin faucet sites with no experience? Is there anything you should be aware of when researching faucet sites?

I’ll explain my observations, and what I believe your chances are of being a successful Bitcoin faucet earner.

I’ll also declare that I’m not associated with any faucet sites, so this article is impartial based on my research.

What Are Bitcoin Faucet Sites

If you’ve never come across a faucet site before then let me explain the concept. I’d imagine most of you reading this just want to know if it’s a realistic opportunity to make money, and I’ll get to that soon.

Bitcoin faucets were created to offer users rewards for completing tasks or activities. Primarily, watching adverts are the main exercise required to be rewarded with the desired cryptocurrency.

So what is this cryptocurrency? Bitcoin! Not quite.

Although called Bitcoin faucets, they actually pay out in small fractions of Bitcoin, which I’ll get to shortly.

So other than watching adverts, what other tasks can you earn from?

Firstly, let’s look at how to earn with watching adverts. When you sign up to a Bitcoin faucet site, you’ll enter a member’s area which will have a section on how to earn. The first option is usually watching adverts, and should be easy to find.

Generally, you’ll be required to watch an advert for a set period of time. This is often 30 seconds, but I’ve seen some that run for a minute. Obviously you don’t need to actually watch the advert, just play Candy Crush or something, nobody is watching you!

Once the timer is up, you can return to your dashboard and the allocated Satoshi will have been added to your account.

Other tasks that may be asked of you are puzzles, where you click on a grid square picture. This will generally reveal another advert for you to watch.

Sometimes they’ll have minor games such as gambling. You may have some Satoshi you’ve already earned and decided to roll the dice. It’s basically a ‘higher’ or ‘lower’ game, so a 50/50 game of chance. This way you can double your Satoshi, or lose the amount you want to gamble on.

As more Bitcoin faucets appear, different tasks or games may come as a result.

This is the interesting part because you really want to understand what you’re earning. So to get a handle on things, here’s what 1 Satoshi is worth.

Yes. One Satoshi is equivalent to 100 millionth of a Bitcoin.

Does this put things into perspective? If not, I’ll give you an earning example shortly, but you probably get the idea that earning Satoshi through a Bitcoin faucet site will not make you rich. Far from it in fact.

Having said that, the excitement of actually earning a fraction of Bitcoin is ideal for some people. Far from me to tell them not to do it. I wouldn’t advise Bitcoin faucets to make money, but for the prestige of earning a small amount of a crypto, knock yourself out.

I’d also like to make you aware that Bitcoin isn’t the only kind of faucet site. There’s not many other cryptocurrency involved but I’ve recently reviewed LitecoinAds which pays out in, you guessed it… Litecoin.

So let’s put some perspective to what you can actually earn per hour. I’ve played around with a few faucet sites just to get some idea of what can be earned. Let’s take ClaimBits as an example.

I completed a task of watching an advert which earned me 5 Bits, approximately 1.5 Satoshi (ClaimBits use an internal currency called ‘Bits’, which is equivalent to 1.5 Satoshi).

I worked out that with navigating to the task, waiting for the advert to load, watching the ad and returning to the dashboard, it takes more than one minute. So let’s assume it took 1 minute which is quite conservative.

So for an hour’s work, you’re earning approximately 2-3 cents. Not a lot is it? But hey, some people may be quite happy with this. I know it’s not enough for me, and I believe my time is worth much more than this.

So now you’ve got a guide as to what the earning potential is really like with a Bitcoin faucet site.

You didn’t think Bitcoin faucet sites were only going to offer free memberships did you!

Most faucet sites will have various membership levels that you can upgrade to. This can be either paid via earned Satoshi, or sometimes cash.

The higher membership level or ranking you are, the more Satoshi you can earn. You’ll also earn more Satoshi from referrals you get to sign up.

You want to be careful with this because it takes a lot of effort to earn decent amounts of Satoshi. It also means you need to make back whatever you paid for your membership. So if you paid 1000 Satoshi to upgrade, you need to earn that back before you begin getting the benefits of more Satoshi earned.

Faucet Sites Are An Easy Sell

It’s possible you may have been offered to join up to a Bitcoin faucet site from a friend, possibly through Facebook or other social media. This is quite common because current members earn more Satoshi through referrals.

What makes faucet sites an easy sell is that many people just see the opportunity to earn cryptocurrency, even though they know it’s a small amount. What they don’t really understand is actually how small the amount.

If you could earn $1-$2 per hour like some survey filling websites, they could almost be justified as a money making opportunity. However, the minuscule denominations are not what people are really expecting when they sign up.

My Concerns With Bitcoin Faucets

I do have a few concerns with Bitcoin faucets, not all, but some. Many of them allow for poor quality advertising to be displayed through their platform. While some show the adverts within their own site, others will send you to external websites to view the advert.

Because I use good antivirus software, often I have vulnerable websites blocked by this program. This is what’s happened to some of the adverts I’ve been sent to, they’ve been blocked as they are unsafe.

Another issue I have is the requirement for Flash Player on some faucet sites. You cannot be forced to install Flash Player, but you may not be able to view the tasks that will earn you Satoshi.

Remember, Flash Player is no longer a safe option to install on your pc or laptop, so I’d advise against this.

So if you are keen on attempting to earn Satoshi through a free Bitcoin faucet site, I’d urge you to do your research first and find reputable faucets that are safe to use.

Are free Bitcoin faucet sites going to give you the monetary income that you’d expect. That depends on your expectations, but they certainly won’t get you wealthy. At 2-3 cents per hour, or 20 cents per day, I believe they are a waste of valuable time.

You’d be better filling out surveys with Swagbucks or Qmee which may get you $2-$3 per hour. Or better yet, if you have enough time on your hands to complete Bitcoin faucet tasks all day, you’re better off investing that time into a blog that you can monetize. It’s easy to learn how to start an affiliate marketing site from scratch, you just need the knowledge.

These free Bitcoin faucet sites serve a purpose for advertisers more than members. They get their ads seen which is the sole purpose, and users are rewarded with tiny amounts. It’s up to you to decide if faucets are worth your time.

← Pinecone Research Survey Review (Legit or Not!) What is Dollar Brite (A Basic Redirection) →

Deep Inside The Underground SEO Secrets: Ruan Marinho Expert Insights
How to Remove an Image Background: Or Use This Library Instead!
What is Affiliate Funnels (Is It Value For Money)