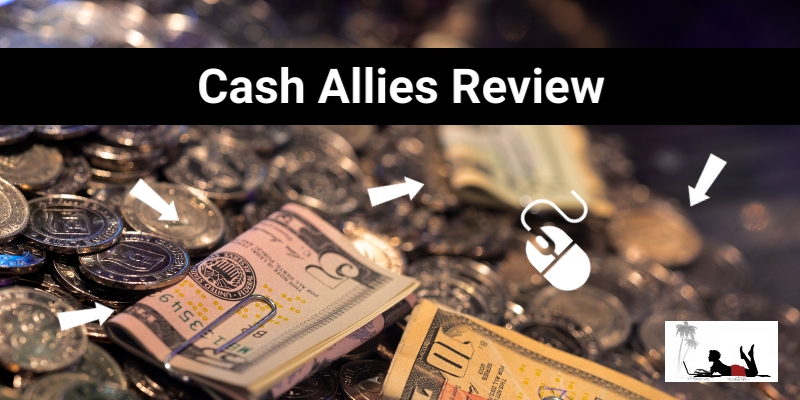 Can you believe it. The same scam is still doing the rounds under yet another domain. You’re obviously reading this Cash Allies review because you want to understand if it’s really possible to make $500 per day by using this program.

The quick answer is NO, you will not be making this amount of money. You may think you are when you log into your members area, but as I’ll explain, Cash Allies is not a legitimate site and you will not receive any money you thought you may have accumulated.

So, let’s take a look at this program and see exactly why Cash Allies is not the program you should be looking at, to make money.

Program Summary: In my opinion, Cash Allies is just another referral site that offers you incentives to completing tasks and recruiting others. Cah Allies will not pay out any accumulated monetary funds you may have accumulated.

What is Cash Allies

Lets begin by reviewing what Cash Allies claims to be. If you look at the ‘Why Choose Us’ section of the Cash Allies website, you’ll see that they claim ‘We have been named the #1 influencer network! We have grown our network to more than 300,000 members who have earned over $44 million.’

Along with this, you will be completing simple tasks such as filling out surveys and entering competitions. Other tasks may be signing up to external sites with your email address and creating a password.

For each of these tasks you complete, you will apparently be rewarded with a monetary contribution. For referring others, you’ll receive $10. Other tasks may offer you $20 or $30.

Inside of the Cash Allies members area, you’ll be presented with a ‘Task Wall’ where all these tasks can be found. Along with this, you’ll see various ‘Promotional Posts’ opportunities. This is where you can promote Cash Allies on your various social media channels, in the hope of referring others to the platform.

One of the larger incentives is to create a YouTube video promoting Cash Allies, and upload it to YouTube.

To trigger your memory, you may have seen this video that promotes Cash Allies.

How Does Cash Allies Work

This is where you’ll get a true handle on why you don’t want to get involved with Cash Allies. You see, Cash Allies is a complete clone of many other websites that a group of scammers have released. The site works like this.

You’ll sign up and be presented with a members area. The Cash Allies members area will have a section where your alleged funds are stored. This all looks legitimate enough, but this is just a monetary figure. There are no actual funds here, and you will never be paid out.

As a Cash Allies member, you’ll be advised of a minimum threshold, which is commonly about $300. The idea is that you will not have the ability to cash-out until you reach this $300 limit.

By the time you reach this limit, you will have referred several friends or family members, maybe others that you don’t even know. This gives the owners of Cash Allies ample time to get more personal information from these new referrals you’ve recruited.

This is the whole purpose behind these replica websites, to get the personal information of as many people as possible. This includes your PayPal information and email address. Once these people have your information, they can either sell it to others, or use your info for unethical purposes.

There are several indications that make be believe that Cash Allies is a scam. You can check all these yourself to confirm my beliefs.

How much proof do you want to see that Cash Allies is a replica site? I’ve reviewed several clones of this exact site, with the majority being able to identify just from the home page. They use many of the same images, and the same testimonials. I’ll get to this soon.

Here’s a list of just some of the Cash Allies replica sites that I’ve reviewed myself.

Here’s a visual representation of how these sites are copies of each other. I’d like you to pay particular attention to the wording of these 3 steps. They are exact replicas with the only change being the name of the domain. 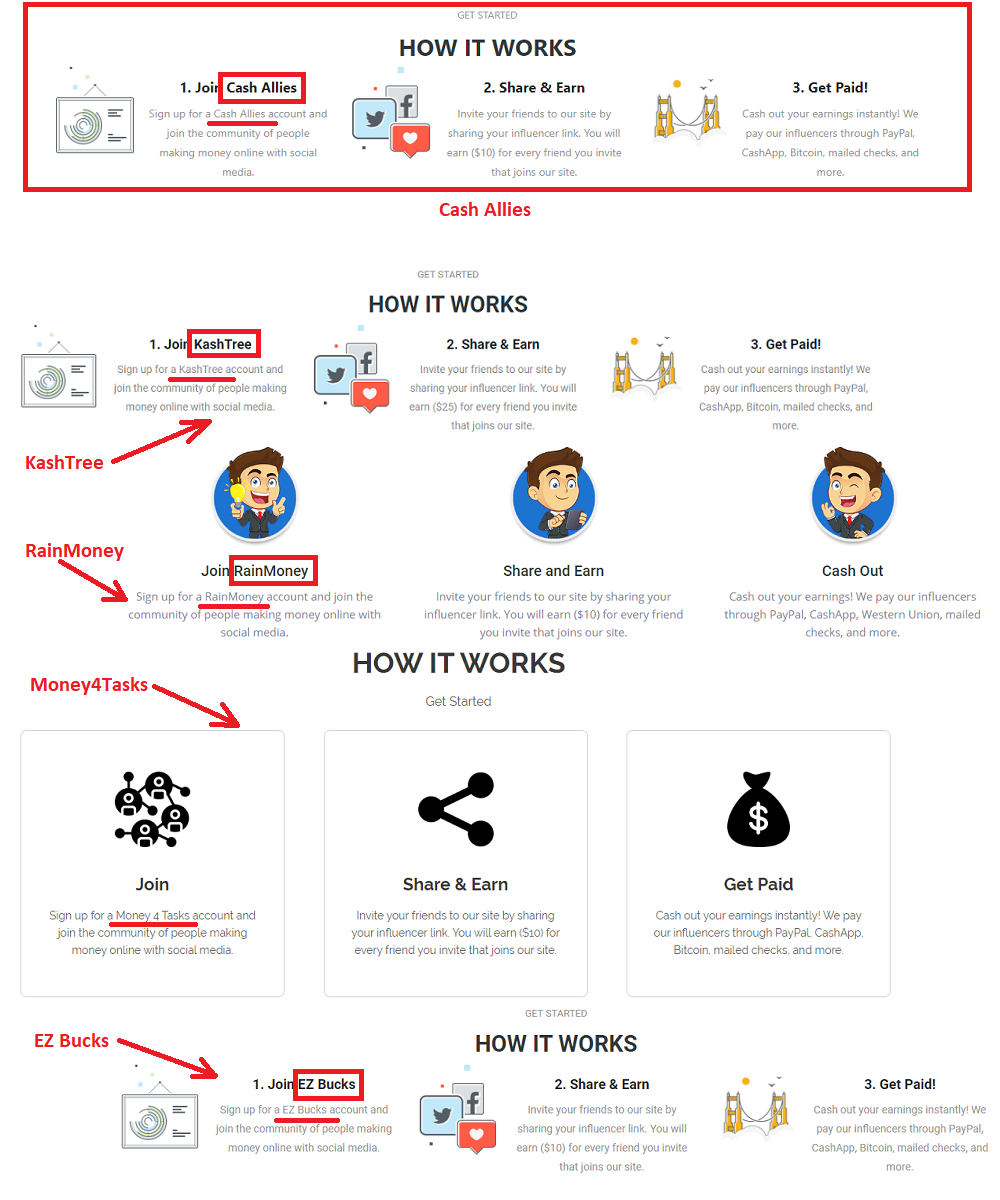 You’ll also notice that KashTree and EZ Bucks are exact clones including the images.

So apparently Cash Allies was founded in 2015.

Remember earlier they claimed they’d also grown their network to more than 300,000 members who have earned over $44 million. I find this extraordinary, and very hard to believe. Especially as the Cash Allies website was only registered on 30 June 2019! 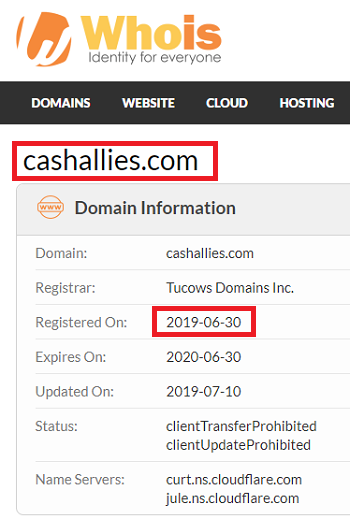 There is no possible way Cash Allies could have accumulated 300K members since June 2019 (It’s Nov 2019 as I write this). And to say members have earned over $44 million dollars in this time is preposterous.

As its free to join Cash Allies, the money apparently comes from their sponsors. Yet this would only be the case for well known organisations, not little known influencer sites. Not many people know of Cash Allies, so the ad sponsorship revenue would be minimal. I believe it’s non existent.

You’ll note under the ‘Testimonials’ menu label, there are 3 video testimonials. These are totally fake, and the people in the videos have not used Cash Allies. These are paid actors that outsource their services through a website called Fiverr.

I’ve taken a screenshot of two of these people. I’ve included their Fiverr profile to prove that they are not Cash Allies users, just spokespeople that get paid a few dollars to claim they have used this service. 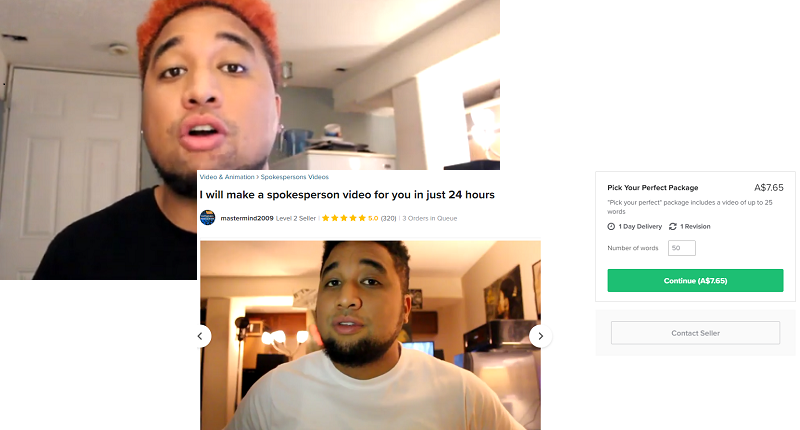 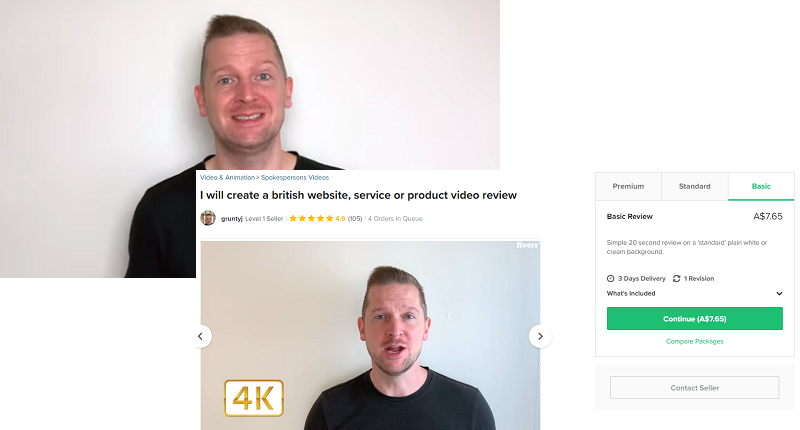 These apparent happy members are not members at all. They are stock images that have been used to create a happy member profile. They are also being copied from site to site, much like the ‘How it Works’ section.

The wording from these happy members changes depending on the program name they are promoting. As you can see in the images below, they have included ‘Cash Allies’ for this website.

Now take a look at these other happy member testimonials that have been used for their other replica sites. 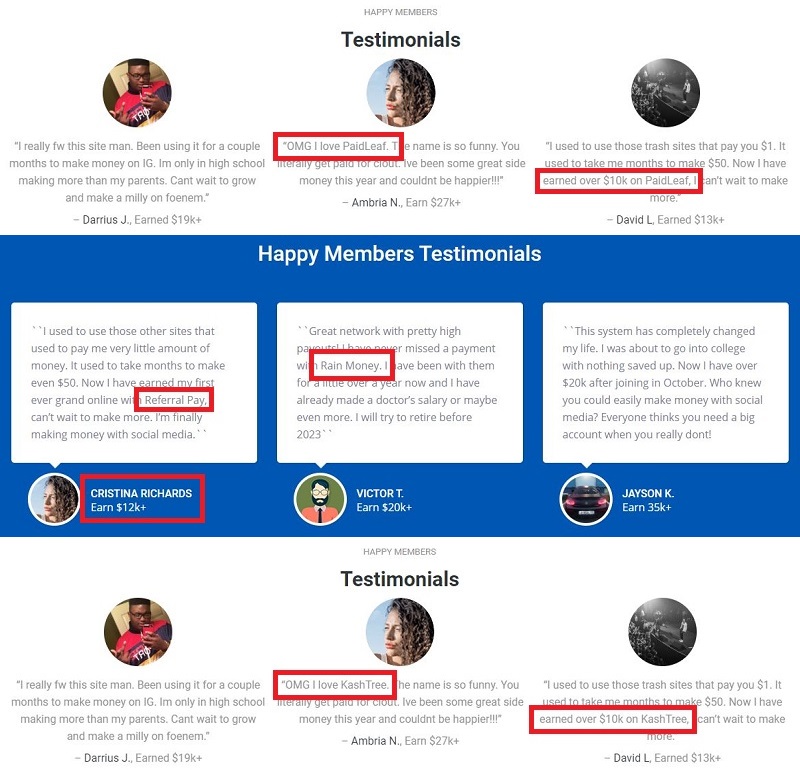 Can you see they’ve just copied the same profiles for these other made up sites. All they’ve done is replace the name of the program with a different one. In fact the lady directly above here is called Ambria N who has earned $27K+, yet in the line above she is called Christina Richards who has earned $12k+.

So I hope you can appreciate that these are not happy members that have used Cash Allies.

Okay, so this did make me laugh. Cash Allies is supposed to be a social media influencer site, the number 1 influencer network apparently. Yet the social media icons placed at the bottom of their homepage don’t link to anywhere.

The Facebook, Twitter and Pinterest social icons just direct users to the top of the Cash Allies homepage. So don’t you think it odd that the apparent No.1 Influencer network does not have any social accounts setup which link back to Cash Allies! I sure do.

Just one more indication that alerts me about the authenticity of Cash Allies. I checked for their contact information and found that you can contact them at ‘Cash Allies, PTY, Melbourne, Australia.

Honestly, Melbourne is one of the largest cities in Australia with a population of about 5 million people. How do you think you’ll contact Cash Allies by sending a query to this address. There is no street name or number, postcode, email address or phone number. The chances of contacting Cash Allies will be zero, and that’s because they don’t want to be contacted.

I’ve reviewed several of these replica sites, and I’ve received comments confirming the illegitimacy of them.

You can also check these sites on Trust-Pilot, a site where reviews can be left for others to consider. One of the Cash Allies replica sites called Influencer Cash has had several reviews through Trust-Piot. As you can see below, not many of these reviews are very complementary.

Because Cash Allies has been created by the same people as Influencer Cash, the reviews are applicable. Both sites are exactly the same.

Is Cash Allies a Scam

Without a doubt, all indications point to Cash Allies being a scam. There are numerous lies and conflicting information throughout the Cash Allies site, so it’s very hard to take them seriously.

Claiming they’ve been around since 2015, and then finding out they only registered their domain name in 2019, should be enough to alarm you. Add to this the fake testimonials and lack of social brandness, and you have the No.1 Influencer scam online.

I don’t like to be the bearer of bad news, but I do like saving people from wasting their time, money and energy. I certainly hope I’ve saved you the trouble of referring your friends to this scam. So, do I have a more legitimate option to make money online?

I was in the same situation as you, always looking to make money online as quickly as possible. Until I understood that it doesn’t work that way anymore. Yes, you can make money online, but you need to change mindset slightly.

I can show you how to build your own online website that produces money everyday, even while you’re sleeping. This website you’re reading right now does exactly that. So if you’d like to learn how to do this, then read my Beginners Step by Step Guide to Affiliate marketing.

Alternatively, you can read about the best training platform that taught me how to be a successful affiliate marketer.

I really believe you need to stop searching for get rich quick opportunities if you intend to make money online in this day and age. There’s a good chance you may have stumbled across Cash Allies through a Tweet or hashtag message, maybe somebody has attempted to recruit you, with the belief that they will earn $10.

Because Cash Allies do not pay out, they will not be getting their bounty. And neither will you if you are lured into this Cash Allies replica platform.

It’s time to think smarter. Build your own online website that can grow into a profit producing machine. This can be your future, and if you do it right, you may never have to work a traditional job again. Read on below to learn how to get started.

← Is PaidLeaf a Scam (Another Fake Replica!) Does LEGO Have an Affiliate Program (You Bet!) →

The Digital Gangsta Course by Julie Stoian: Really Worth The Cost!
The Best Legitimate Affiliate Marketing Training Program in 2021 and Beyond
4 Best Affiliate Programs for Fashion Bloggers: Your Seasonal Trends