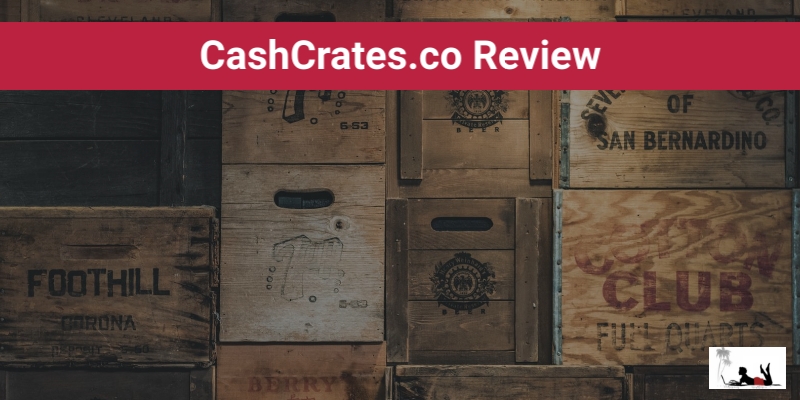 One of the newest in a long line of replicated sites circulating lately, is called CashCrates.co. You may have been tempted to sign up and earn, what they claim, is hundreds of dollars per day. You have some serious questions about CashCrate.co though, like these:

You’re in luck having done your research, because I’m going to explain the following:

By the time you’ve finished reading this CashCrate.co review, you’ll have a much better appreciation of what the program is, and if it’s worth your effort. You will also be proud of yourself for having done your research, and I applaud you for doing so.

What is Cashcrates.co
How Does Cashcrates.co Work
When Can You Cash Out!
Red Flags
Is CashCrates.co a Scam​
Learn to Make Money Online Legitimately

What an incentive to lure you in hey! $50 just for signing up, that’s unbelievable right!

Well yes, this amount will be added to your internal account, but as you’ll soon understand, you won’t get paid.

Here’s what that referral link will look like, along with a button where you can apparently earn $50 by completing surveys & downloading apps. I’ll touch on this in a moment.

Doesn’t this just sound like an awesome opportunity to earn heaps of cash. By the sounds of it, you could earn hundreds, if not thousands of dollars per day. But….it it all legitimate!

I’ll show you the inside of CashCrates.co so you can make an informed decision for yourself.

CashCrates.co is a very cunning site that looks genuine, but is not legit. I’ve created an account so you can see the inside of Cashcrates.co, and the earning methods that are supposed to line your pockets.

Firstly though, are you over 99 years of age? If so, great. You may get paid. If not, then you’re not entitled to use the Cash Crates site to earn money. Unbelievably, this is stated in their terms and conditions.

So, if you’ve passed this criteria, you can carry on with the rest of this review!

When you first sign up, you’ll be presented with the CashCrates.co dashboard and a referral link to pass onto new recruits. I’d urge you to not get anyone else to join, this is a good way to lose friends or family. 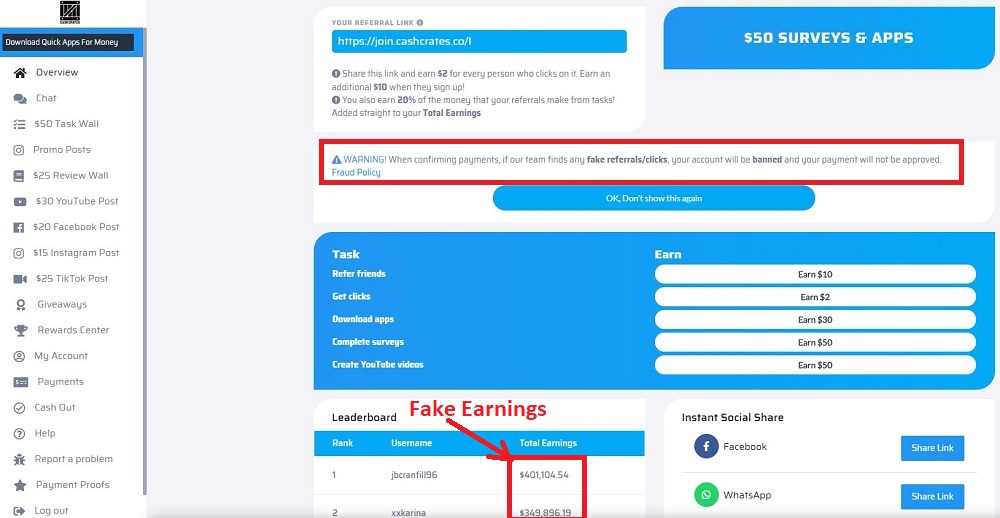 Here’s something I’d like you to pay close attention to. What you’ll notice here is that there’s a warning, alerting you that fake referrals/clicks will not be tolerated, and your account will be banned under their fraud policy.

This is just one way CashCrates.co will get out of paying you, even though you may NOT have done anything wrong. That’s right, CashCrates.co do not pay out their members. This is a scam and you will NEVER be paid. Just remember as I mentioned a moment ago, you need to be OVER 99 YEARS OF AGE!.

The other thing to note is the apparent earnings. These are not real, and I’ll explain the fake elements of this website shortly.

So to allegedly make money with CashCrates.co, you’ll have various options that are labelled in the dashboard down the left hand side. Here’s a brief explanation of each section.

All of the above (apart from the $50 Task Wall) are encouraging you to post either a video or banner on social media, along with your referral link. They even have written documentation of what they want you to say. Below is what you’ll be encouraged to post on Instagram.

This is false and misleading, as CashCrates.co has never been on Forbes or Yahoo News.

In regards to the $50 Task Wall, this is also extremely misleading. Many of these tasks earn well below $50, but as you know, you’ll not receive any amount of money anyway.

When Can You Cash Out!

Now. What about the initial $50 just for signing up. You may be wondering if you can just cash out the $50 and move on. This won’t be possible, because when you attempt to cash out, you’ll get this message. 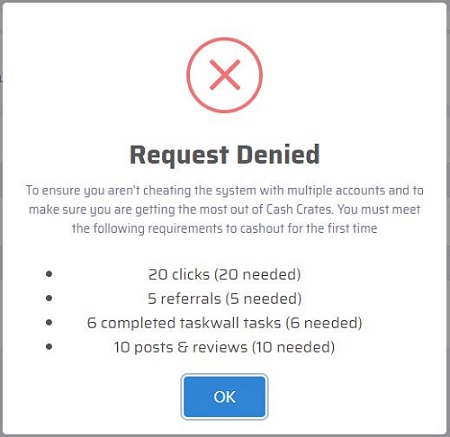 So, without meeting the above criteria of 20 clicks on your referral link, 5 referrals, 6 completed Task Wall tasks and 10 posts & reviews to social media, you won’t have the ability to cash out your $50.

This is the whole intention of CashCrate.co though, they have no intention of ever paying you. So what’s going to happen if you sign up to CashCrates.co is this.

As you can clearly see, you’ll just be wasting your precious time.

Oh yes, there’s plenty things to look out for that may alert you that CashCrates.co is not all that it seems. Just take a look at these indicators that may give you second thoughts.

I’d like you to pay attention to the CashCrates.co About page, which gives a brief history of the site. They state that the launch of Cash Crates was in 2015, which was the beginning of their story.

So if this is the case, why was the CashCrates.co domain only created in April 2020! 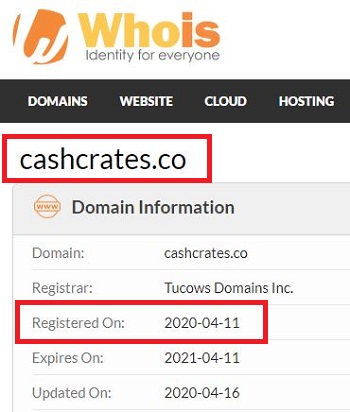 Obviously they are telling porky pies. The reason there’s a 5 year gap is because CashCrates.co did not begin their story in 2015. They are just attempting to gain some authority by making this story up.

No doubt you’ve probably seen the ‘Big Influencers’ on the CashCrates.co home page. Well these big influencers are nothing of the sort. I searched these images and found that they have been taken from other sites to use here. 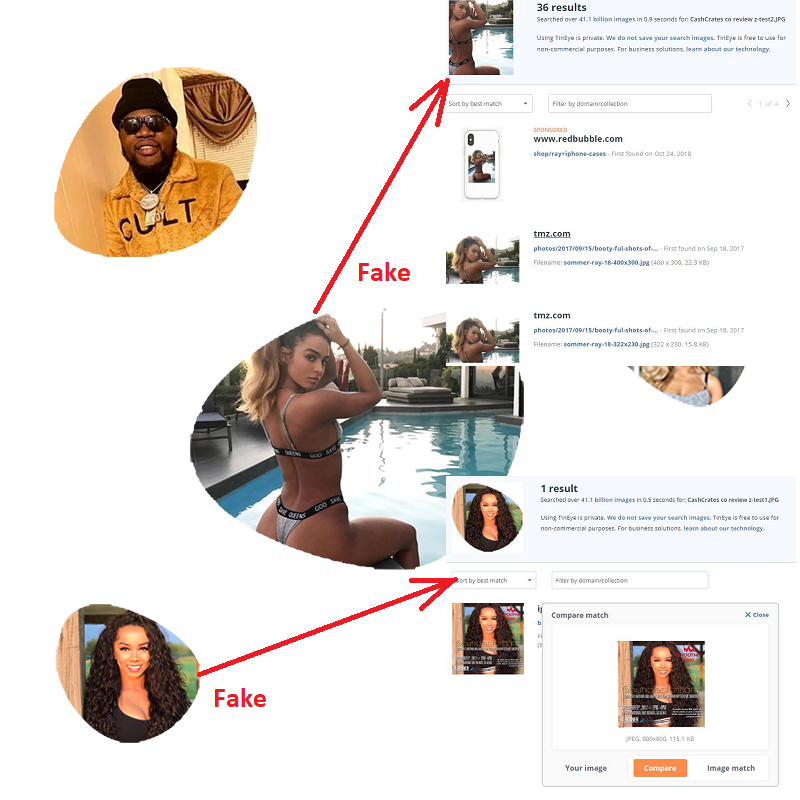 The lady bottom left is known as @bundleofbrittany. You can search for her on Google and you’ll see she’s a very successful model. The image was stolen from the magazine cover when she was on Smoothie King.

The image of the lady in the center has been used 36 times over the internet, and she has no affiliation with CashCrates.co. She is also a model and her image is used extensively on the tmz.com website.

I mentioned at the beginning of this review that CashCrates.co is a copy of other websites, and one of them was called EarnAndGo.co. If you were to type in EarnAndGo.co in a web browser now, you’ll be redirected to the new CashCrates.co.

These are all replicated websites that are constantly being exposed as a scam under their current domain name. Once they stop getting visitors, they start up a new website with a new name.

I’ve reviewed many of the other scam clones, here’s just a select few that you can see.

Okay, that’s enough, I’m sure you get the picture. These are all cloned from each other, but some certainly have more effort put into them. CashCrates.co is one of those, but there’s definitely been a lot more work put into this one.

They’ve even gone to the trouble of setting up blog reviews that they want their members to leave comments on. Obviously, they will claim that members will be rewarded for their efforts, but as we all know, no payments will be made.

Don’t you think that if any company could afford to pay members the amounts claimed on CashCrates.co, these two things would happen:

It’s just not realistic to expect these kinds of returns from such little effort. There’s no money coming in from any members, and the companies they claim to partner with, is false. So there’s no real money that can be paid to members.

Just out of interest, I decided to check the live feed Twitter profile that is displayed on the homepage. I clicked on the profile name and was directed to Twitter, only to find that the account does not exist!

Just another fake profile to attempt to gain some sort of authenticity.

In July 2019, the BBB published a consumer report pointing out these exact sites, and why you should steer clear of them. In fact they specifically mention the first site in the list I mentioned above, Notion Cash.

You can read the BBB consumer report here, which clearly states “The money appears to tally in the account for each completed task, but when consumers try to apply for payment, often when they reach a $250 threshold or some other set amount, they allege that they are unable to retrieve the promised payment or contact the company for assistance.”

It goes on to say that consumers are also worried that they’ve provided their personal sensitive information. The problem then snowballs because they have inadvertently given out links to their friends and family, which then becomes a deeper issue.

#7 Tasks Are Not Real Tasks

If you pay closer attention to the $50 Task Wall (which I’ve explained doesn’t pay $50), you’ll see that all the tasks involve providing personal information. 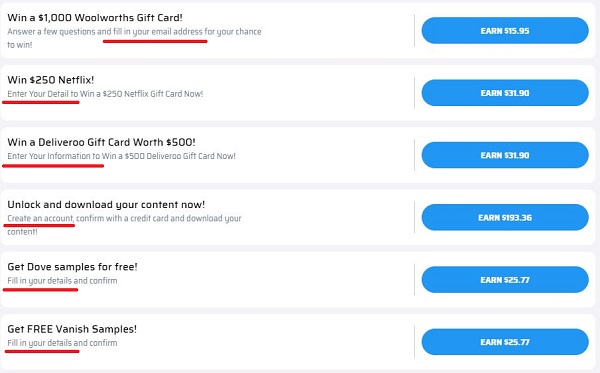 These all either ask for your email address, enter your details, enter your information or create an account. They are not simple tasks like with a PTC site like Cash Travel, or Bitcoin Faucet sites like FaucetDuck, where you click on adverts to earn points. They are not survey filling either.

No, all you’ll really be doing is providing these companies with your personal information, which is exactly what they are after.

Yes, of course it’s a scam. As I’ve said, loads of these copied websites have been reviewed in the past and exposed as scams. This is just another in a long list of unethical attempts to obtain your personal information.

This is likely the work of the same people behind Paid4Clout, BreadGains and Tap2Earn. All scams that encompass the same inner workings and don’t offer a real opportunity to make money.

Several years ago, I was looking for similar ways to make money online. I kept finding low quality products and got scammed a few times myself. I needed to find the right opportunity that would allow me to make money long into the future, without being conned.

I also needed to change from searching ‘quick money money methods’ to genuine opportunities. All the products that offer quick returns just want your money, with no real chance of succeeding financially.

When you think about it, our lives are so long, so why not spend several months building up a profitable website, instead of attempting to make money tomorrow? These ‘quick’ opportunities don’t exist anymore, like they may have around the millennium.

So, I learned from this platform how to build my own money producing website that builds and builds. The more I work at it, the more it pays me. The more authoritative my website now becomes, the more money I make over and over again.

You will have got the impression that CashCrates.co is a scam that will not pay you a cent. This is my verdict and that of many others.

If you’d like to learn how I make money for myself, read on below.

What is Fan Page Domination by Anthony Morrison
What is TaxJar (Your eCom Tax Solution)
Is BeMyEye Better Than a Survey: You Be The Judge!