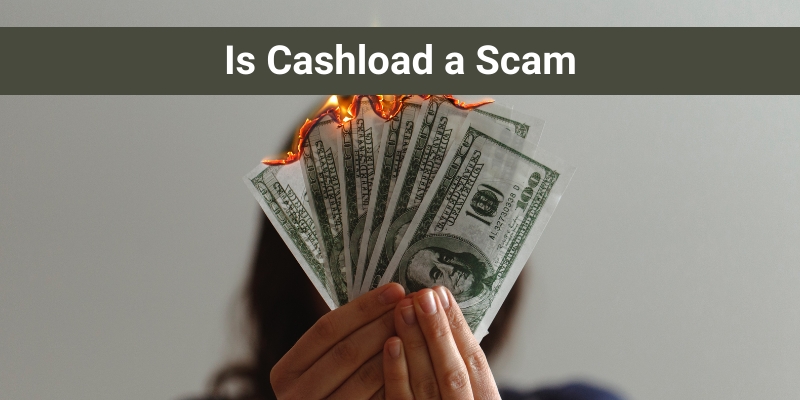 Before I get into the meat and potatoes of this Cashload review, I’ll give you the heads up. This is a SCAM. Do NOT join and expect to get paid from this website. I’ve reviewed countless products and programs, some great, some awful. This falls into the awful category.

I’ll give you my honest appraisal of Cashload, and show you why it’s a scam. With many illegitimate products doing the rounds on the internet, I applaud you for doing you due diligence and researching Cashload before signing up. Well…hopefully you haven’t signed up yet!

So pay close attention, and let’s see what makes Cashload an unethical opportunity.

Program Summary: In my opinion, this is a scam site that will attempt to get your personal information, and the info of those close to you. You’ll be asked to refer others to Cashload, which I highly advise against.

Here’s what you’re led to believe will happen, if you decide to become a Cashload member. Apparently, Cashload is an influencer marketing platform that aims to be the conduit between you, and top advertising brands.

You’ll be offered monetary returns in exchange for promoting these brands in several ways. The preferred method that Cashload wants, is for you to refer as many people as possible to help promote Cashload. The more people signed up, the more exposure for these big brands.

Therefore, the more money the advertising brands will give Cashload. This is the claim behind how Cashload is going to pay you.

Cashload claim they’ve been around for some time, and they used to pay 0.10c for every referral you got into the Cashload membership area. However, apparently they’ve grown so much that they can now afford to offer you $10 for each referral.

Other incentives are also offered, such as receiving $1 for each time someone clicks on a link you’ve provided, or even $10-$50 for filling out surveys or testing new apps or products. You’re led to believe that you can make hundreds of dollars per week, or even per day with Cashload.

The kicker to get you to sign up, is that they offer you $25 just for creating an account. Is this really sustainable? I don’t think so.

So, is Cashload a scam, or a genuine opportunity to make some good money?

Okay, now the truth behind Cashload. Firstly, let’s understand one thing. This is a scam and you will never be paid. I’ve reviewed other sites that are a clone of Cashload, which have also been exposed as a scam.

Recently I reviewed Influearn and Paid4Clout, both replica scam sites that offer exactly the same tasks and referrals. The returns are also similar, so what’s actually happening here. Why do Cashload want you to sign up for a free program and offer these incentives?

Cashload are really after your personal information, which can be extremely valuable. When you sign up to Cashload, you’ll be handing over your email address and creating a password. Unfortunately, unless you use a password protector app such as Keeper Security, many people still use the same passwords for lots of things.

Should you use the same password for Cashload that you use for other critical sites, these guys will have it on their database, along with your email address which is often used as a username. I can’t stress enough the importance of using a password protection program.

So basically, whoever is behind Cashload is accumulating your personal data which they can use however they want. They can on-sell your information to third parties, which is common. They can earn good money from this.

There’s really 2 things to make note of here. Firstly, I’ll list the possible options that money can be accumulated into your Cashload account. Secondly, you’re Cashload account means nothing, because this platform does NOT pay out.

Apparently you’re going to get paid to complete any of the following actions.

Now how do you think this company is going to afford to pay you. Remember the $25 you get just for signing up. Well, that figure will be placed into your Cashload account, along with any other incentives you may have accumulated along the way.

Unfortunately, this account figure is just a number. There’s no actual money circulating in this platform. These ‘big brands’ they talk about are not contributing to Cashload in any form.

Think about the returns they claim to give you. Firstly, $25 just for signing up. No company can afford to offer that. Commonly, you may get $25 off a membership fee for joining a program, which is basically a reduced cost of an inflated fee. Legitimate companies don’t just payout $25.

As far as the other incentives go, the figures claimed are too high. They are deliberately offering you this amount to lure you to join, and many will fall for it. I’d urge you to resist this scam. In general, company’s may offer a few cents per click or filled out survey. They can’t possibly make money themselves should they pay the Cashload figures.

There’s always indications that trace these programs back to being a scam. Let’s check out a few red flags that show not all is legit.

Do you remember the claim that Cashload say they’ve been around a while, long enough to have increased their initial referral commissions from 10c to $10? Well, you’d imagine that would be a substantial amount of time wouldn’t you. Maybe a couple of years or so minimum!

Well, no. As you can see in the following image, this domain was registered on the 26 June 2019. Now, I’m publishing this article at the beginning of September, which means it’s no more than 3 months old! 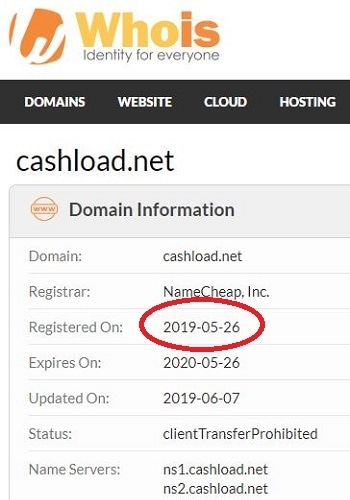 The reason for the newish domain, is because they also have cloned websites under different domains which are constantly being exposed. Which is a good lead into my next point.

You’ll find this is an exact replica of Influearn, a website I reviewed last month. The whole template is the same, they’ve just replaced the logo with the Cashload logo.

There are no doubt many other clones of this website out there, attempting to entice unsuspecting victims to this scam.

And if you look at the image of Ivan, you can see that I’ve found his image used 74 times on the internet, including a stock image website called Unsplash. You can see the full image here.

So basically, this is an image from Unsplash, which has been used to create a fake testimonial.

It’s common to include a minimum payment threshold but in this case, it’s used to get you being active for a longer period. If you can sign up as many referrals as possible before you reach the threshold, that’s the ideal scenario for Cashload.

This is because as soon as you reach the threshold and attempt to make a withdrawal, you’ll realise this is a scam and they’re not going to pay you out. How do they get away with this you may be thinking.

Well, when you first login to Cashload, you’ll be presented with a disclaimer announcing that Cashload will not pay you if they notice any fraudulent activity has gone down. So even though this wouldn’t have happened, they will say your account is fraudulent, and therefore you payments will not be made.

As with all of the cloned sites that they’ve created, whoever is behind this just plucks an address from a major city to use. I found this worked in my favour when Clout Bucks stated their address was in Melbourne Australia. That’s because I live there, and was able to confirm there was no Clout Bucks office at the address given.

While I don’t live in NYC, I can look up the address and see that It does seem suspicious. In fact it’s the same address that one of their cloned sites uses, called Influearn.

This address also conflicts with their terms of service address, which I suggest was just copied from one website to another without modification.

So it seems odd that this website, which was registered in Panama, has a Terms of Service address in the UK and a contact us page in US.

You can guess by now that I wouldn’t recommend Cashload to anyone. This is a scam that’s been doing the rounds lately, and is an offshoot from other cloned websites.

It’s set up to get your personal information, and there is no benefit whatsoever in joining up to this system. You’ll be encouraged to refer your friends and family to join, which will be a great way to lose those friends, once they find out what they’ve been referred to.

An Ethical Method to Make Money

Are you interested in learning how to make real money legitimately, without having to rely on an untrusted program like this to pay you? Then why not follow my lead and try affiliate marketing.

I’m not going to tell you that making money online is easy, but I will tell you that there is no silver bullet that will allow you to make money quickly online. There are no ‘Autopilot’ systems that really work, or ‘done-for-you-systems’ that allow you to sit back and watch the cash roll in.

Yeah, it would be great if there was, but don’t you think everyone would be on board if that was the case. Nobody would be in a traditional job!

Now, if you’re willing to put in a bit of effort, it’s possible to build your own long term profitable blog. All you need is the correct education, and you can check out that education here.

I truly hope I’ve saved you the trouble of signing up to Cashload, or any other scam website you may have seen on my website. I really hate seeing people get scammed, and I’ve been one of them.

After searching for a long time, for the ideal model of making money online that suited me, I now advise people of the better opportunities and courses out there. There’s plenty of ways to make money online, although some of these will only make you small change.

To make the bigger bucks, I’d advise affiliate marketing, starting an eCommerce store or selling on Amazon. There’s variations of these models, and all are sustainable methods of success. But you’re best off to get the right education.

← Is Trunited a Scam or Legit Opportunity (To Make Money!) Is The Pampered Chef An MLM Scheme (What's Really Cooking!) →