Is Click2Earn a Scam (Exposed Again!) 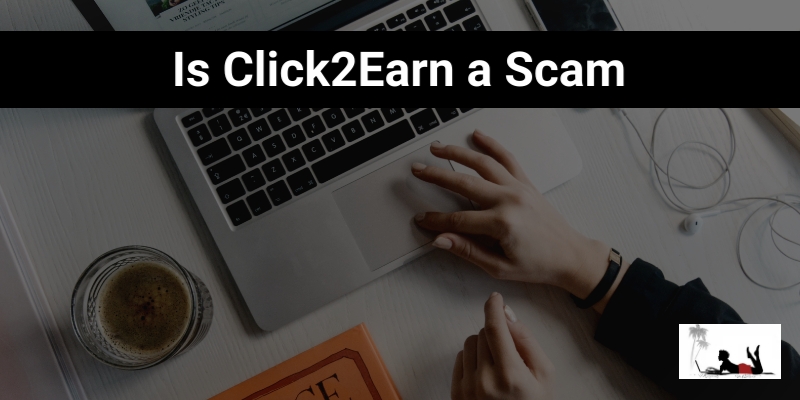 If you’ve recently been enticed to join an influencer program called Click2Earn, I’d urge you to be vigilant. I don’t believe this company is as legitimate as it claims to be.

I applaud you for doing your due diligence and trying to find out the authenticity of Click2Earn.club before making the commitment to sign up. Don’t worry, I’ll sign up for you and give you an insight into what you can expect.

I hope to give you some clarity around Click2Earn so you can decide for yourself if its worth your time and effort. To save you some time, I’ll quickly give my opinion. I believe this is a scam, and you will not be paid out. In this Click2Earn review, I’ll show you what indications bring me to this result.

Program Summary: In my opinion, Click2Earn is a copy of other sites doing the rounds that don’t pay out their members. They claim to be the No.1 Influencer Network, and so do all their replica sites. Stay away.

When you sign up to Click2Earn, you’ll receive a $25 bonus, which all sounds great. You will also get the impression that you can earn $500 per day.

The parent company of Click2Earn is Zindex, who have apparently grown their network to over 455,000 members who have earned over $68,000,000. Bold claims I know, so I’m at least a little sceptical.

As a Click2Earn member, you’ll be presented with various methods and tasks to earn set fees. They state you need to be 13 years old to become a member of Click2Earn, as this is the minimum age for most social media platforms.

Let’s take a closer look at how Click2Earn works.

So when you sign up to Click2earn, you’ll go directly into the members dashboard area. One of the first things you should pay attention to is the Fraud Policy which suggests that if their team finds any fake referrals/clicks, your account will be banned and payment not approved.

I believe this is how they get away with not paying anyone. I’ve seen multiple reviews that have stated they were refused payment because of fraudulent activity.

So down the left side of the members dashboard area, you’ll see a list of activities where you can earn money, and the standard administration stuff like my Account, Payments, Cash Out etc. 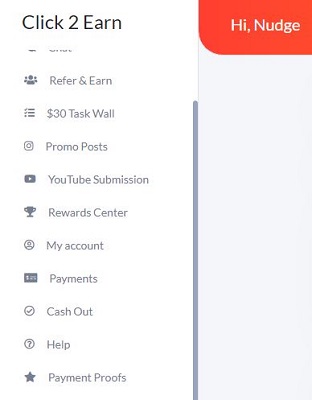 The main purpose of this site, and many others that are complete replicas (I’ll get to this shortly), is to get as many people as possible to hand over their personal information. This is why they focus so aggressively to refer others to Click2Earn.

So, you’ll see the first item is ‘Refer & Earn’. So for each person you refer to Click2earn, you’ll receive $2 just for clicking on your referral link, and $10 if they sign up to Click2Earn. That’s a pretty handy commission don’t you think, I wander how they’ll get the money to pay you for this! Again, I’ll get to that soon.

Next on the dashboard comes the $30 Task Wall. So even though it says ‘$30’ Task Wall, they only pay $20 for these tasks. That’s because this site has been copied from from others and they’ve forgotten to change the amount shown. Other cloned sites offer $40 or $20 on their Task Wall, hence the error. 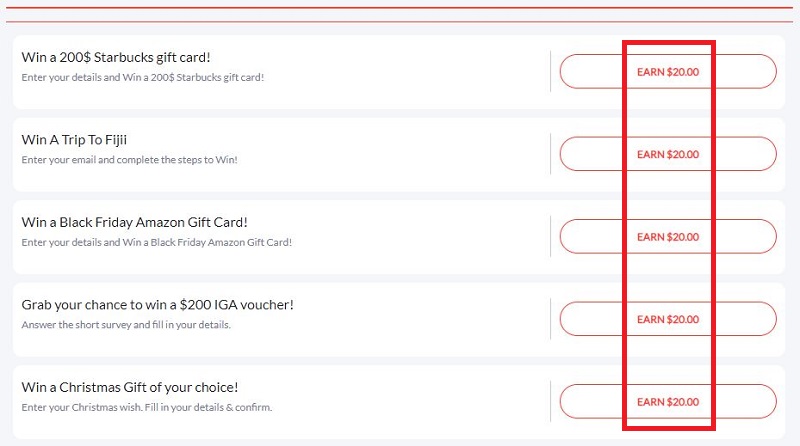 These tasks are basically filling out your details in competitions or possibly filling out surveys. The company you’re taken to, will not be paying Click2Earn much money at all for completing these tasks, so again, how on earth can they pay you $20.

One of the more tedious tasks they will ask you to do is to create a video and upload it to YouTube. This video will be promoting Click2Earn.club and has to be over 1 minute long.

Apparently, they will pay you $50 bucks for this task. Yeah, good luck with that.

So ultimately, you’ll be completing all these tasks and the money they will allegedly pay you will be accumulated into your Click2Earn account. Unfortunately, this is just a pie-in-the-sky figure, they don’t have the money to pay you.

Click2Earn will find an excuse, such as their fraud policy, not to pay you out. They can’t pay you, they don’t have the money. By the time you’ve got to the minimum threshold (which isn’t stated in this case, but on other sites they’ve stated $300), they have got what they wanted anyway. That is, more referrals to extract personal information from.

There’s several red flags that I’ll make you aware of. These indications basically confirm that this site cannot be trusted.

The Click2Earn ‘About Page’ will tell you that they have been around since 2013. Well. after a little digging, I found out that their website was only registered in October 2019. 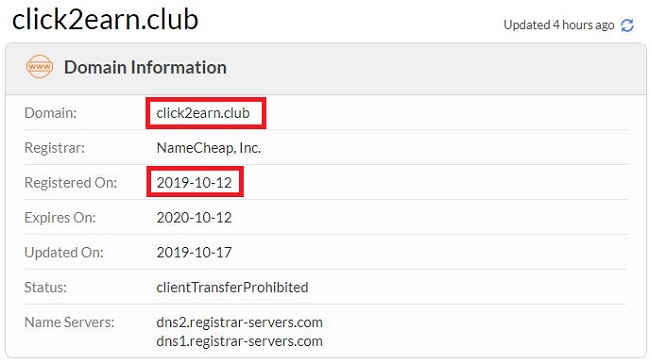 Doesn’t this seem strange that an alleged Influencer network, which relies on the internet, has not had a website for it’s first 6 years! Not if you’re just creating cloned websites after previous sites are exposed as scams.

The testimonials cannot be believed. What Click2Earn does, is get profile images from stock image websites, and create fake testimonials. These profiles are given a name and a written testimonial to look authentic.

The also get switched between replica websites, and possibly get their names changed.

In the case of Click2Earn, I’d like you to pay attention to Mira Peterson. Apparently, she’s an SMM manager, but they won’t disclaim her company. But this isn’t the only website where this image is used either. 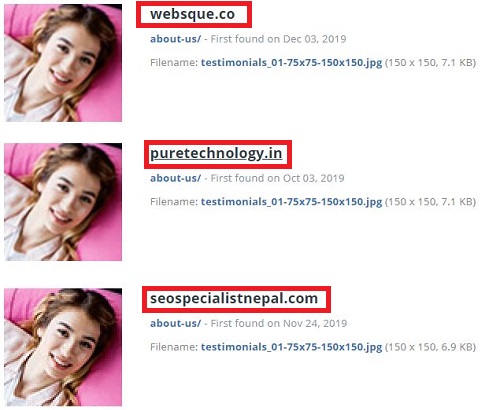 Testimonials are not the only images that are fake, I’ll show you the claimed support team shortly.

I’m perplexed about the apparent parent company of Click2Earn, which is called Zindex. I’ve done a Google search for Zindex and absolutely nothing came up in the search results.

I find it extraordinary that a parent company is not large enough to be known by the biggest search engine on the internet.

Surely this wouldn’t be the case with the ‘No.1 influencer network’ online! Ah, yep. That’s exactly where these links point to. Unless they decide to change this, the social media links point to the home page of these social channels.

I’ve mentioned that Click2Earn is a cloned website. Well, there’s loads of these replica sites circling the internet currently, I’ve even reviewed about a dozen of them, just like EarnBucks and Click4Kash.

Not all of these replicas look exactly the same on the home page, they’ve changed it up a little to make them seem different. The members area of all these sites are the same, you can even check out some of my other reviews for yourself.

Here’s just some of the sites I’ve reviewed:

The list goes on and on. I’ve reviewed more than this but you get the picture. Each of these have similarities on the homepage, all claim the be the No.1 Influencer Network and the same members area structure on the inside.

I’m not going to say much about the apparent payment proofs, other than to say, BS! 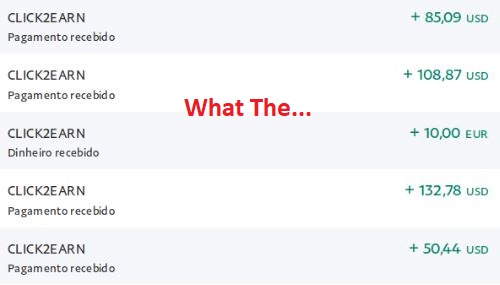 If these are payment proof, I’m 15 feet tall.

Okay, on the Click2Earn About page, you’ll see images of the support team. There’s 2 ladies are called Nina and Cherlyn. This all seems logical so far, apart from the mistake they made when making this replica website. (Yep, this was copied from Tap 2 Earn).

In reality, these are stock images that have been made into these support member profiles. As you can see below, they are sourced from Adobe Stock images and have been used many times on numerous websites. 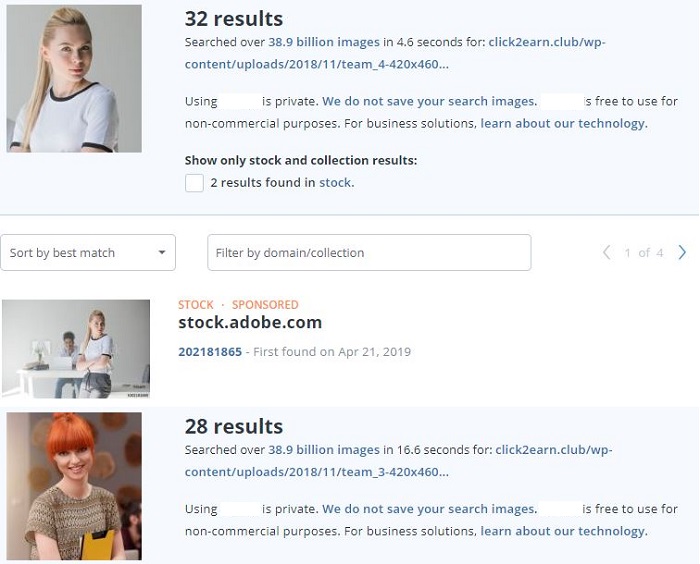 So, while this may look legitimate on the surface, these people do not really work for Click2Earn.

Where Does the Money Come From

Click2Earn claims they have paid out $68 million to their members, so where do they get this money. The fact is that you aren’t spending any money, and neither are your referrals. Nobody is buying anything from them, so where does the money come from.

It’s claimed the money is generated from ad-spend revenue and sponsorship, but there’s no way it could amount to the figures claimed. I’ve also noticed that all these copycat sites even share the exact same wording about how the system works. 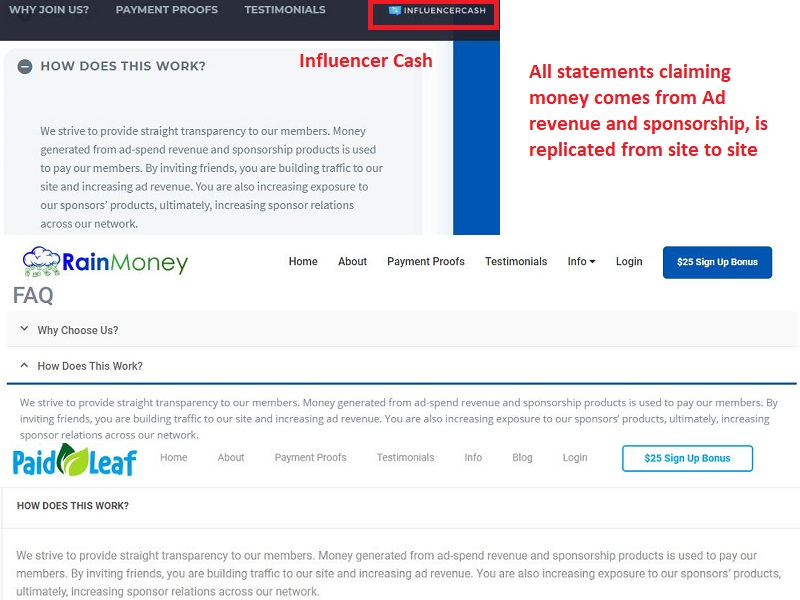 This all just seems too far fetched to realistic. Which company in their right mind would pay you $500 per day for completing a few tasks like filling out forms. Any company that did this would go bankrupt within a day.

One last thing I’d like to add here, is that the BBB (Better Business Bureau®) is aware of these guys and have written a consumer report that you can read here. It talks about these Influencer Networks and how you need to be aware of them.

It even mentions another of these replica sites that I reviewed called Notion Cash, and state the possible reasons for these websites – “One possible purpose of this kind of operation may be data harvesting, for the likely intent of selling the consumers’ information to spammers. There is also the possibility of identity theft.”

I have no doubt that Click2Earn is a scam. With so many red flags that indicate something more sinister is happening with these cloned sites, I’d find it very difficult to approve.

I’d urge you NOT to sign up to Click2Earn or give them your personal details. The accumulated money that you think is yours will not be paid out.

I understand you’ve come to this review because you’re on the lookout for a way to earn money online. Searching to make a quick buck online is the ideal scenario, but it just doesn’t happen these days. You’ll only get scammed time and time again if that’s what you keep looking for.

What if I told you that it’s possible to create your own online blog, and you can make money from it, over and over again. Well, you can. This website of mine does just that, but there is a catch. You actually need to put in some effort.

I can show you where I got the training, the tools to help me and the support of thousands. You can read about this company here, they are the best in the industry at teaching affiliate marketing.

So you have two choices. Keep searching for that elusive get rich quick opportunity, which you’ll never find, or start making progress now buy building your own profitable blog. It won’t happen overnight, but down the track a little you will be pleased you chose this option.

← The Etsy Affiliate Program in Review (Uniqueness!) How to Start Affiliate Marketing From Scratch in 2021 →