Is Earn As I Do A Scam (Or Is It Worth Your Time!) 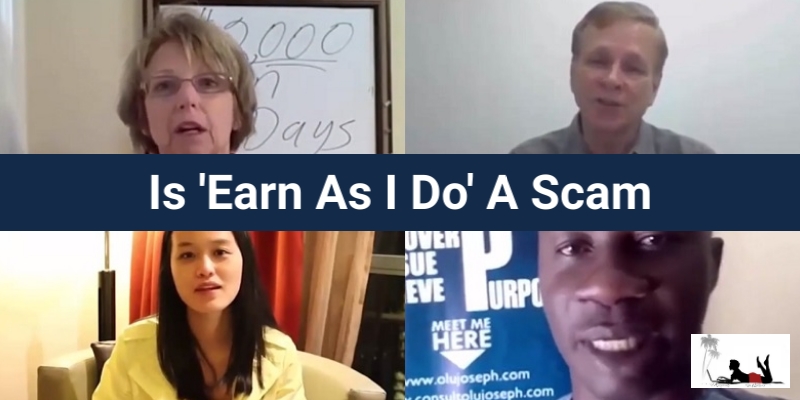 ‘Earn As I Do’ Review

Earn As I Do, is a rehashed scam from years ago. The sales video used is the same as a previous alleged money making site called Automated Daily Income.

You’ll hear large claims of wealth from the fabricated ‘Karen Daniels’, and most of the video is full of unrealistic and hyped up expectations.

I hope this ‘Earn As I Do’ review serves a great purpose is directing you away from this scam. To unearth all the indications that have alerted me to this scam, feel free to read the full review.

‘Earn As I Do’ Summary

Product Name: ‘Earn As I Do’

Program Summary: In my opinion, I believe ‘Earn As I Do’ to be a rehashed scam. The suggested method of posting links is not how you make money online. The only product you’ll receive will be basic link posting training.

Okay, as I’ve stated, Earn As I Do has been launched recently to entice more people into this scam. Several years ago, the same system was doing the rounds under a different name, known as Automated Daily Income.

Earn As I Do is not the only alias either, there are a few ‘fronts’ to this scam, with it also being known as Home Online Profits and My Home Cash Club.

At the time, you were directed to a website called MOBE, an expensive pyramid type program. MOBE was shut down in 2018, so now the owners behind this scam have had to find another poor excuse of a program to direct users to.

I believe they were sending users to another site called MSW System (Money Sucking Websites), but this site no longer exists. So, you will now be directed to any other poor quality platform that they can find.

What ‘Earn As I Do’ Claims To Offer

If you’ve bothered to watch the whole ‘Earn As I Do’ sales video, which is extremely long, you’ll have heard all the claims. Apparently, Karen Daniels was living paycheck to paycheck, wanting a better life for her, and her daughter. She needed to find an income source, but had a list of demands!

Wouldn’t we all want that.

Now allegedly, just 2 weeks later, she’s found exactly this kind of opportunity through a link posting system. She claims that she quit her job after 3 months, and now works 1-4 hours per day and earns double what she earned before.

She has no financial worries, and feels secure, free and happy. Well, isn’t that just dandy.

These opportunities are the exact thing many people want to hear, and are looking for themselves. Unfortunately, they don’t really exist.

The problem is that the ‘system’ doesn’t even exist.

How Does ‘Earn As I Do’ Really Work

You’ll only be signing up to the next affiliate product that the scamming owners sell. Don’t get me wrong, there’s nothing wrong with affiliate marketing. It’s how I make money myself. The problem here, is with the lies and deception.

Ethical affiliate marketers like myself offer genuine products that can help. The guys behind Earn As I Do are not ethical. They are directing you to any program, just to earn commissions for themselves. They disregard what the buyer wants, instead giving them crappy guides and information they didn’t think they were signing up for.

Promotion of ‘Earn As I Do’ is basic trickery. The system that ‘Karen Daniels’ talks about is not what you’ll be receiving. I’ve seen loads of these ‘systems’ before, and they are never as stated in the scammy sales video.

Not only will you be helping out the owners of this program by allowing them to make money from your purchase, but you’ll be doing yourself a disservice. This is because the products you’ll receive will be basically worthless.

Who Is Karen Daniels

This is an interesting question, because the lady in the photograph is certainly not Karen Daniels. The image that has been used in the sales video has been stolen from a totally legitimate website.

Having done my research, I took a snippet of the image of the alleged Karen Daniels. I plugged it into a reverse image search program, and an image result came up saying the file is called kara-at-her-desk-933×1024.png.

So, I typed this into Google, with inverted commas. The results showed this image as the first to appear. 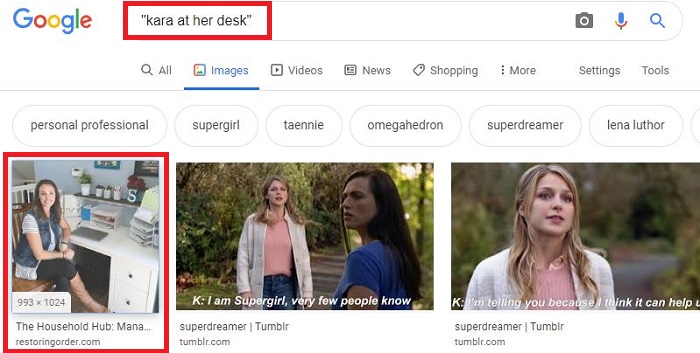 This then shows me the original place where the image was stolen from. It’s a great blog called Restoring Order. The lady in question is called Kara, not Karen. She’s the Communications Assistant at Restoring Order.

Here she is talking to Vicki, the owner of the website. 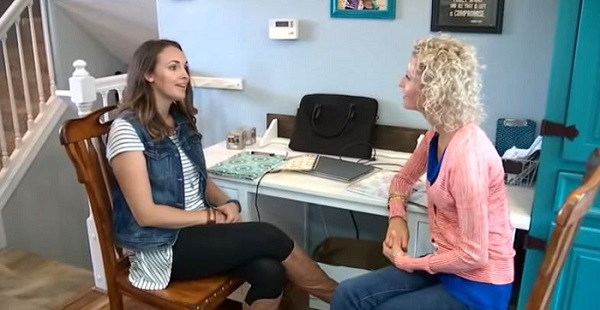 This has got to be a huge indication that ‘Earn as I Do’ is a scam.

Earn As I Do Red Flags

Okay, let’s check out some of the red flags that indicate how legitimate ‘Earn As I Do’ is.

What seems very odd to me is the maths claim that I alerted to earlier. It claims you can be making $15 per post, or $1,125 per month with 1 hours work per day. But…earlier in the sales video, she states that companies would have to “buy new buildings and hire and house thousands of new employees” to post links themselves.

This doesn’t make sense. If you worked an average 8 hour day, you’d be earning $1,800. That’s $5k per typical 5 day week! It would be cheaper to buy the new buildings!

I’ve already mentioned Karen Daniels being a fake, well, I also believe the testimonials are fake. I’ve reviewed loads of these scams in the past, and the common factor they possess is that they use people that outsource their services.

If you go to Fiverr.com and search video spokespeople, you’ll find hundreds of people that will video themselves having claimed to use your product. Many of these people are serial offenders, claiming they’ve made thousands of dollars with the next big scammy system.

All these kinds of systems offer you a money back guarantee. However, they can always get out of it. I recently reviewed a product called Profit Point Autonomy which also claims a 60 day guarantee. Yet only prior to your order confirmation!

So, once you’ve ordered the product or system, there is no longer a guarantee. That’s exactly how all these scams get away with a guarantee.

#4 Results Are NOT Typical

As usual, the small print is what gives you the truth behind these products. Nobody generally reads the small print, which clearly states ‘The average person who follows any “how to” information gets little to no results’.

Oh, and if you thought that $47 was the end of your costs, think again. I’ve underlined the above that states you will be offered access to a platform that will help implement what you learn in the training.

So, this basically means you’ll be given some basic guides about posting links for your $47. Then, you’ll have to pay more to gain access to a platform where you can post these links. This just gets weirder and more expensive. I can also guarantee that this platform will also be a monthly cost.

Yes it does, and it’s directly targeted towards those that dream about making it rich online without putting in any effort. If this is you, I’d urge you to stop trusting the hype, such as wording like ‘simple 3 steps’ and ‘push a button’ for wealth and riches. There is no such thing.

Instead, maybe focus on building yourself a substantial investment for the future. Get the correct training for what you want to do, and put in the effort. I don’t want to discourage you from making money online, but I have to be honest. It won’t come from one of these ‘get-rich-quick’ opportunities.

You’ll also need to work at it. There are options out there, but nothing comes easy these days, especially in the competitive online world.

Is Earn As I Do a Scam

You bet it is. The whole video is a fabricated story to make you believe that you’re a chance to hit the jackpot. Karen Daniels is a fake profile, the guarantee will not be available to you and there are several inconsistencies in the whole process.

The product you’ll receive upon signup will be nothing like what is suggested on the ‘Earn As I Do’ sales page. You’ll also have given the creator of this scam your email address, so they can bombard you with more get-rich-quick opportunities.

I’d urge you to keep well away from sites like ‘Earn As I Do’.

How I Make Money Online

I mentioned earlier that affiliate marketing is a genuine method of making money, and it’s how I make money online. Can anyone do it? Sure, if you’re willing to invest some time and learn a new skill.

I understand that you want to make money fast, but you’ll just end up wasting a lot more time and effort if you’re following these poor systems that offer crap.

Keep reading below if you’d like to learn how I make money online.

Is This The Best Online Affiliate Marketing Course For Beginners
1 Month Business Builder - One Funnel Away Challenge
Is Bluehost Still Popular in 2020 (The Stats Are In!)