Is KashTree a Scam (This Tree Lacks Cash!) 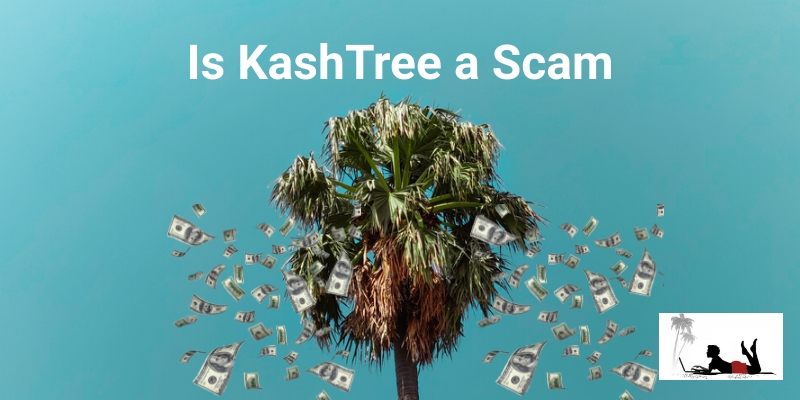 This just looks so familiar, another site that claims they will pay you for referring others to their program. Not only that, just for signing up you’ll get a $25 bonus. So what can we make of KashTree. Is KashTree a Scam or the perfect opportunity to make those extra few dollars you need to get by.

I was immediately sceptical when I saw KashTree for the first time. It seemed very similar to some other sites I’ve reviewed in the past. I can now confirm that my suspicions are validated, and I’ll reveal the truth in this KashTree review.

Program Summary: In my opinion, KashTree is just another replicated website that offers incentive based tasks and referrals. They are known for not paying out their members.

As a new visitor, you may be wondering what KashTree is all about. By browsing the homepage, you’ll get the impression that it’s possible to make easy money online. This is far from the truth, and I’ll show you why in this review.

The KashTree homepage and subpages will provide apparent payment proofs, video testimonials and FAQ’s (frequently asked questions). These are not legitimate examples, which I’ll explain soon.

If you’re one of these people that is searching for a way to make money online quickly, you are the exact market that KashTree is targeting. Unfortunately, you’ll be getting scammed should you sign up to KashTree.

Although on the outside, KashTree looks like a legitimate opportunity to earn some dollars, the inside is a complete replica of other programs I’ve reviewed, which are also illegitimate. So lets take a look at how kashTree really works.

For a start, let’s get one thing straight. KashTree is not here to help you make money. I’ve reviewed several of KashTree’s other cloned websites, and they all share the same attributes.

KashTree claims to be a ‘share & earn’ website, but in reality they are a scam website. KashTree will use people as pawns to recruit others into their program, with the lure of cash incentives to achieve this.

They start off by offering you $25 just for signing up, and this will be reflected in your KashTree account figures. Once you enter the members area, you’ll be given a warning that states ‘‘When confirming payments, if our team finds and fake referrals/clicks, your account will be banned and your payment will not be approved’. I’ll come back to this warning message shortly.

So inside of KashTree, you’ll be presented with a dashboard of options that you can use to allegedly make money. These options consist of the following:

Obtaining people’s personal information can be beneficial for scammers. The can use this information in several ways, and even sell it to third parties. While I’m not convinced of the actual purpose of obtaining so much personal information by KashTree, I do know that you should not be passing over your info.

This is not the first time I’ve seen the same site, just with a different dressing on the outside. Whoever is behind KashTree has released the same program before under different domain names. I’ve even reviewed several of them.

Check out these programs that I’ve reviewed, which are all similar in nature to KashTree:

I’ve reviewed all these sites before, and I have no doubt they are all created by the same person (or group) who is behind KashTree.

I’ve even signed up to these sites (with a test email address mind you), and the members area is almost identical. They all share the same dashboard and referral options, and an account area which accumulates the funds dependant on the tasks you complete.

The other major factor of why you don’t want to sign up to any of these programs – THEY DON’T PAY OUT!. I’ve even been contacted by people claiming they have not been paid, even though they’ve passed the threshold limit.

Do you recall the fraudulent disclaimer warning I mentioned earlier in this article? They will use this clause to ban your account, even though you will have done nothing wrong.

These sites have all been proven to be illegitimate, so I urge you NOT to sign up.

All these cloned sites have indications that give away the scam that they are. Here’s just a few.

Let’s start with how old KashTree claims to be. If we look at their ‘About’ page, you’ll see the wording ‘KashTree was founded in 2015’.

Okay, so why was the KashTree domain name only registered in August 2019! 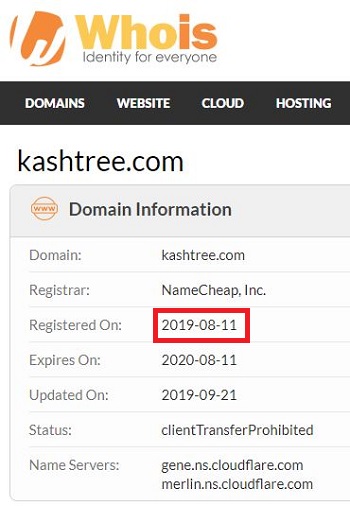 The reason is because this same program has been exposed under various other domain names, so they’ve had to keep inventing new names to scam more people.

All websites, especially those that claim is a business and therefore will be paying out funds to people, should have a Privacy Policy and/or Terms & Conditions page. There are usually links to these pages placed at the bottom of the Homepage.

In the case of KashTree, there is nothing to be found in terms of these lagal pages anywhere on their site.

Do you not think it odd that a company that claims to be the ‘#1 Influencer Network’, doesn’t have these legal entities. I certainly do.

Any company that claims they will not only give you $25 just for signing up to their network, but also $40 for every time you complete a basic task, would go out of business quick smart.

This is not the way to financially run a business, but it is how they lure people into their program. Offering these large monetary returns is simply not sustainable, but many people want it to be true.

Of course it would be great to earn $40 just for posting on social media, and when you begin, you will see your account funds going up. As I’ve already explained though, they will not pay you out.

Like all the other replica sites that have been created, the payment proofs and testimonials are fake. It’s easy to get a spokesperson to create a short 30 second video claiming they’ve used your product, and this is what they’ve done here.

Fiverr is usually the go-to outsourcing platform to find these testimonial actors, and they will create a video for just a few dollars.

The KashTree payment proof images are also fake, and have been copied to all the other domains that I listed above. The apparent ‘happy members’ of KashTree have also been copied from site to site. As you can see in the image below, they just change the name of the domain in the testimonial transcript.

In my humble opinion, I have no doubt that KashTree is a scam, just like all the other clones of this site. There are several indications that alert me to the fact that KashTree is on the unethical side of things.

I’d urge you NOT to sign up to KashTree, and instead look for a more legitimate way to make money online. I’ll give you a few ideas.

If you’re the type of person that wants to make money online quickly, then this may be a problem. It’s extremely difficult in this era to make money is such a short timeframe. With millions of people each day searching how to make money online, this is not surprising. And if it was so easy, everyone would be doing it.

Of course you could go down the route of filling out surveys or completing tasks, but you want to do it with a genuine company like Qmee or SwagBucks. In my opinion though, these sites just don’t pay enough for the effort you put in.
It could take you an hour to fill out a survey, and get $2-$4 in return. My time is worth much more than that, so surveys are not my thing.

There are other legitimate ways to make money online, but you’re going to have to put in a bit of effort. Here’s 3 options that can build you a long term sustainable online income.

The above options are genuine methods of sustained online success. They are proven methods that can be learned by anyone.

Unfortunately, we would all like to believe that it’s as easy to make money online as what KashTree claims. In reality, there is no such thing. Marketers will always try to lure you in to their programs with the claims of quick wealth, and it’s only human nature to WANT to believe this.

Building your own long term income method is a better way to go in my opinion. Sure, it can take you time and effort to get going, but once you start to get traction, you’re on the road to a successful long term online career, with NO BOSS!

So choose the right way of making money online, and avoid the scammers.

← What to do When You are Bored on the Computer (Make Money!) Elysium First Day Entrance Review (Funnel Vision!) →