Is Notion Cash a Scam (A Rehashed Brand!) 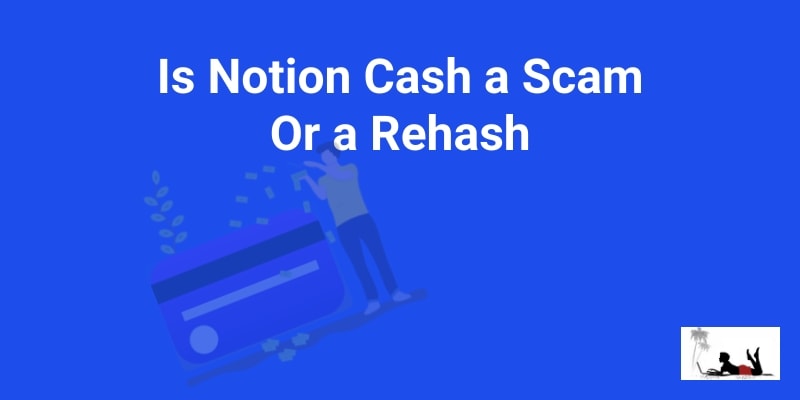 I feel like I’ve got Déjà vu reviewing this program. It has all the hallmarks of a different product that I recently reviewed. Anyway, I’ve had a request to look over this program as it’s recently making a mark on people.

The website looks legitimate, but there’s a few signs that trigger alarm bells. So I’ve dug a little deeper and will alert you to what Notion Cash is all about, and if you can really make money by signing up.

So lets dive in, and review Notion Cash.

Program Summary: In my opinion, this rehashed product is not going to make you any money, and you’ll probably lose friends after referring them to this scam.

What is Notion Cash

Have you ever visited a site where you thought it’s possible to earn extra cash online by completing a few tasks? Maybe filling out surveys and referring others to a particular program. Well, that’s basically what Notion Cash claims to be. But the big question is, are they legitimate

To give you some idea, I’ve reviewed similar programs like this. One is called Clout Bucks, another is called Viral Dollars. All these programs claim to pay you more than expected for such minor tasks. Which begs the question, how can they afford to pay you?

So, you’ll have the option to fill out surveys, complete tasks and refer others to this website. Each of these has a monetary value placed on them, that you’ll supposedly earn.

Unfortunately, like the identical sites I mentioned previously, when the time comes to cash out, you’re not going to receive any money.

How Does Notion Cash Work

In reality, the main focus of this program is to get as many referrals as possible. When you sign up, there will be a larger focus on you referring any of your contacts to this program. This doesn’t only include giving you a link to pass out in your social media circles, there’s also banner promotions for you to paste into your social feeds as one of the paid tasks.

Once they get people signed up to Notion Cash, they will use the contact email address to send out future promotions. These promotions will not be legitimate, but they will earn their own commissions, should they get the email recipients to sign up to other products.

Not only will Notion Cash obtain these email address, they will also have access to names, phone numbers and street addresses. They can do a lot with this information, with a common activity being to on-sell the information.

I mentioned that each task or referral has a monetary value assigned to each. These can range from $2 – $30, depending on the activity. The money will be added to your internal account.

Unfortunately, they don’t seem to payout any money to people that have signed up and completed tasks. There’s a $250 threshold that you have to meet, which is fairly large anyway. To cover themselves when suspending or closing accounts, they state that fraudulent activity was recorded in your account. At lease they do tell you this will be checked. 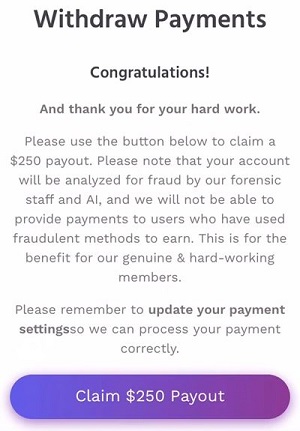 When you attempt to make a withdrawal by reaching this limit, you’ll get notified of fraudulent activity.

Where Does Notion Cash Get The Money

Thirty dollars just for completing a 2-4 minute task seems a lot of money to me. At that rate, you could earn well over $400 per hour, which is extraordinary. Too good to be true I’d suggest.

Well yes, it is too good to be true. You see, these guys will earn a commission each time YOU fill out a survey or complete specific tasks. However, their commissions will be fairly low. Many of these tasks are via CPA (Cost Per Action), which offers small commissions (usually under $1) for an action being taken.

And how does anyone make money from sharing their link on social media. For instance, if you share Notion Cash’s link on your social feeds, lets say somebody signs up. They can join for free, so where is the revenue made, to pay YOU for the referral.

I doubt they will be paying you through an act of kindness.

I decided to check out how long this website has been active, because I know they used to go by a different name in the past. I looked at their How & Why page, which states they’ve been working for over 13 years.

However, when I did a domain registry search, the site was registered on March 12, 2019. Well, as of writing this review, that means the domain is not even 3 months old. 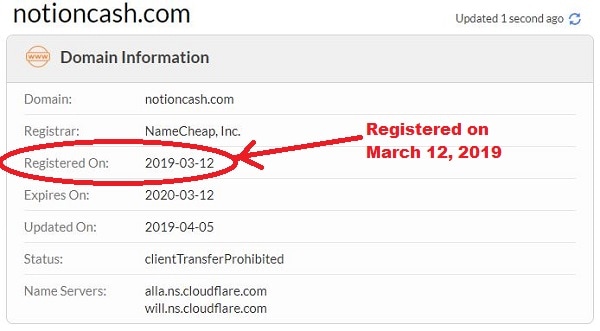 It seems that the same people behind Clout Bucks, are also behind Notion Cash. These domains have also been called Kids Earn Money (no longer active) and Kids Paid Money (also no longer active). Kids Earn Cash is also another domain that they use, which as I explained in the Clout Bucks review, gets redirected to Clout Bucks.

This all seems very suspicious if you ask me, and I’d be keeping well clear of Notion Cash.

Now, About Those Testimonials

Again, I have Déjà vu. I’ve seen all these people that have created video testimonials. They all offer their services on Fiverr, a website where you can offer all types of digital services. All you need to do to find these people, is head over to Fiverr.com, hover over ‘Video & Animation’, then go down to ‘Spokespersons Videos’.

This is where you’ll find all these men and women outsourcing their talents, for a small fee in return. I’ve highlighted two of them here, who have also done testimonials for other scam products.

You can check out my reviews of Secret Millionaire Bot, 7 Minute Daily Profits & AZ Millionaire Method just to name a few, to see this lady promoting those scams also.

Don’t think I’m having a go at this lady, she’s just trying to earn an income online herself. I’ll let you be the judge as to whether acting for scams like this is moral or ethical.

I’m just trying to make you aware that this sort of thing goes on. Not all testimonials are legitimate, and the crappy products are the one’s where they outsource to spokespeople like this.

Oh, and another thing I noticed. When you watch the testimonials, you’ll notice the title of the video in the top left corner says ‘Review of Influencer Club’. This either means that these reviews are not for Notion Cash at all, or Notion Club used to be called Influencer Club. Often scams like this change name after they’ve been exposed first time around.

Is There Support for Notion Cash

While there is a contact form to get support from Notion Cash, I’d be extremely surprised if you got a response. What really concerns me, is the lack of ownership. Any legitimate product or program out there, will display who the owner is.

The owners are hidden from Notion Cash, which alerts me to the fact they are not doing everything by the book. Having reviewed many of these types of programs, I always give more credibility to products which show who the owner or founder is.

I wouldn’t be dealing with any company that I didn’t trust. Lack of ownership details is a big red flag to me, as they don’t stand by their product.

Unfortunately, too many scams like this exist on the internet. In my opinion, this is just one of those products that doesn’t meet the expectations or claims they make. Having seen the history of Notion Cash, you can clearly see it has a checkered past before it’s new domain name.

I certainly wouldn’t be recommending this product to any of my readers here. However, that doesn’t mean there aren’t legitimate opportunities to make money online. On the contrary, there’s various ways to do this, and I’ll show you how I do it.

Because if poor quality products, misinformation and claims of quick wealth that can’t possibly eventuate, most people fail at making money online. Most people are also looking to make money online quickly, which is simply very hard to achieve these days.

One method that gives everyone the opportunity to succeed for very little start up costs, is affiliate marketing. The benefits of this model are extremely good also, mostly because it allows you to have time freedom. Here’s a list of other benefits you’ll gain from affiliate marketing:

Depending on your circumstance, you’ll have many other benefits also. In my case, I got to the situation where I hated the regimented routine of an office job. Getting up early to catch the train to the office, working for a boss that paid me an average wage, then getting that same train home.

I needed something different, an opportunity that gave me more freedom and depending on how much I worked at it, the opportunity to earn greater sums of money.

Affiliate marketing has given me this exact opportunity. But before you get too excited about what I’m proposing here, some home truths.

To be a success at affiliate marketing, you need to treat this like a job. You need to understand that it will take time to become successful and there’s a period of time where you won’t be making any money at all.

This period of time though, is allowing Google and other search engines to see what you’re doing. You’re building the foundations of your asset before it takes off.

Without explaining too much more here, I’ll provide you with two links. Here’s where you can read my Beginners Step by Step Guide to Affiliate Marketing, and here’s a review of the best affiliate marketing training platform to help you achieve success.

Thanks for reading my Notion Cash review, and I hope I’ve clarified many of the questions that you had. If you’ve used Notion Cash, Clout Bucks or any of the other domains that this product goes by, I’d be happy to hear your experience.

Simply place a comment in the discussion section at the bottom of this page.