Is PaidLeaf a Scam (Another Fake Replica!) 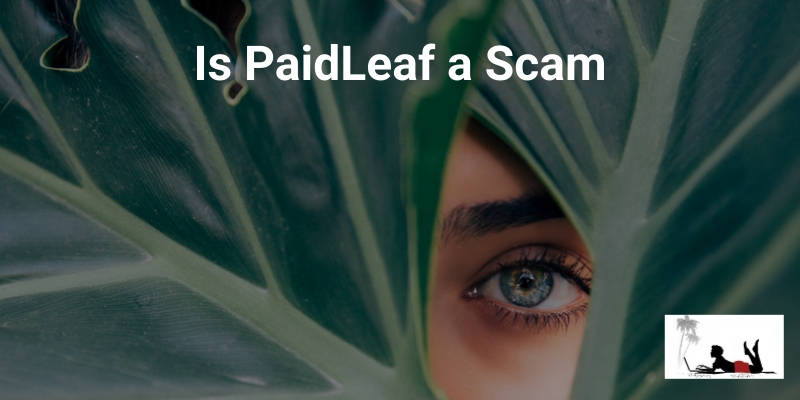 Here we go again, the same old scam being re-circulated under a different domain. If you’ve landed on this article to get an understanding of PaidLeaf and how it works, let me tell you now that Paidleaf is a scam.

In this PaidLeaf review, I’ll explain to you what the motive is behind this program, and prove to you why they cannot be trusted. There are indicators everywhere that PaidLeaf is a scam, and you should not entertain the thought of signing up with them.

Program Summary: In my opinion, this is just another clone of many others scams. Whoever is behind PaidLeaf and others, are in this to get your personal information, and the information of others.

Having reviewed many of the similar coles of this site, I can tell you exactly what PaidLeaf claims to do, and the underlying truth behind it. Firstly, PaidLeaf claims to be the #1 Influencer Network and help as many people as possible change their lives by taking advantage of social media. The reality is much different to his.

Should you sign up to PaidLeaf, you’ll enter into your membership dashboard area, and be greeted with various methods to earn some cash. The first option you’ll have will be to use the ‘$30 Task Wall’, where you can complete various tasks for a return of $30. How they intend to pay you this, I do not know.

What tasks can you complete? Filling out surveys, entering competitions, creating accounts or just giving over your personal details to external third party sites. So how can they afford to pay you $30 for any of these menial tasks? They can’t, it’s just not sustainable.

The other options they’ll give you to make money are to promote PaidLead on your social media channels such as Instagram, Twitter or Facebook. They’ll even give you a slightly bigger incentive to create your own YouTube video promoting PaidLeaf, and uploading it to YouTube.

None of these tasks will earn you any real money, here’s what will happen.

They’ll attempt to entice you with a $25 sign up bonus. This is just a figure that will go towards your total earnings.

Inside of your members area, you will find your account figures, which includes your clicks, referrals, tasks and earnings. Unfortunately though, while this earnings figure will rise with the tasks you complete, you will never get paid out by this scam.

The program is a clone of another site. In fact there are so many clones of this exact site doing the rounds, it’s hard to know which was the first of its kind.

The main activity they want you to undertake, is to refer others to PaidLeaf. You’ll notice this because of all the tasks they set up for you. As I’ve explained, the Task Wall is mainly giving you promotional posts to place on your social feeds, with the intention of recruiting others to PaidLeaf.

The reason for this, is to gather as many people’s personal information as possible. It’s unclear what they intend to do with this information, but the possibilities are endless. I’d urge you not to give them your PayPal email address, you don’t want this compromised.

There’s a history behind PaidLeaf and it doesn’t make for very good reading. I mentioned earlier in this article that Paidleaf is a clone of other sites. Well, just check out these other domains that have replica sites to PaidLeaf. The links below are to my own review of these copycat websites.

All of these sites have the same members area on the inside, and can often be identified externally. Sometimes the owners go to a little more effort in an attempt to cover up the clone, by making more homepage changes.

However, they usually miss something that often gives the game away. Like forgetting to change the name on their about page, I’ve seen that before.

Still undecided whether this is a scam or not. Check out these red flags that will give you a much better indication of this sites authenticity.

The video testimonials that have been uploaded under the ‘Testimonials’ menu dropdown are all fake. PaidLeaf have paid these people to claim they’ve used their program and made money from it. How do I know this? Because I’ve been reviewing scams like this long enough to recognise the same faces appearing in all these scams.

I hadn’t seen one of the guys before though, so I though I’d see if I could find him on Fiverr, the most common place to find these paid spokespeople. Sure enough, I found this guy there also.

You really need to be careful with some of these testimonials. The majority of scammers search Fiverr looking for the most appropriate person to help them sell their product, just like legitimate companies do.

Unfortunately, there are too many willing participants to do this, knowing they are helping out scammers.

You’ll be led to believe that PaidLeaf has been around since 2015, because that’s exactly what they claim on their ‘About’ page. You can clearly see this from the snippet I took below.

However, having done a domain search to get the truth, the paidleaf.com domain was only registered in September 2019! So how can they possibly claim that they’ve been around since 2015! 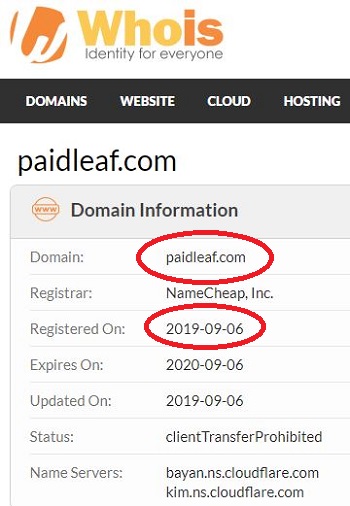 This is just another clear indication that not all is legitimate.

Okay, this is almost comical. You will notice here that whoever is creating these replica sites are just copying the written testimonials from site to site. The images below are taken from PaidLeaf, and it’s various clones. This first snippet is from PaidLeaf.

Now comes the replica written testimonials that are on KashTree, a clone of PaidLeaf.

Do you notice they’ve just changed the name of the program. Now take a look at this. The below image has come from a different clone called Rain Money. What you’ll notice is that the lady is no longer called Ambria, she’s now Christina Richards. Same image, different name.

And while they’ve remembered to change the name to Rain Money in the second written testimonial, they haven’t changed ‘Christina’s’ wording, as it still says ‘Referral Pay’, another replica site of PaidLeaf.

Okay, you probably get the picture by now.

Yep, it’s a scam. Do not enter your information, do not give them your email address and do not trust any other sites that look similar in nature to PaidLeaf. There are many more replicas of this site out there, so be aware.

They may not look exactly identical to PaidLeaf. Others such as Clout Bucks have a completely different front altogether, but the testimonials and payment proofs are the same. Inside all of these, you’ll get the same members area. Just remember, whatever tasks you complete, you will not get paid for.

I really don’t want you falling into the trap of thinking that money can be made on the internet quickly. This is exactly how PaidLeaf lures you in, they know that so many people are searching for ways to miraculously make fast money online.

I’m here to tell you that money can be made online, but it’ll take longer than you think. If it was that easy for anyone to earn good money online within days or weeks, don’t you think everyone would be doing it.

So, what are your options. If you had experience in something, you could create a course online and sell it. A lot of people do this and use Udemy as their selling platform.

Maybe affiliate marketing is for you. In fact, it’s ideal for beginners as you don’t really need experience. You can learn how affiliate marketing works as you build a website. If you’d like to know where to get the best education for this, check out my Wealthy Affiliate review.

Other options are setting up an eCommerce store, or learning to sell products on Amazon. These are both proven methods of success, you will find there’s a slightly larger learning curve involved though.

Then there’s the legitimate sites that can pay for your filling out surveys or completing online tasks. Qmee and SwagBucks are two such sites. I wouldn’t recommend those however, because the amount they pay is hardly worth your time.

In my opinion, affiliate marketing is an ideal option to make money online. It could be a sustainable long term solution to your money problems, just don’t expect miracles overnight.

Do you really think its sustainable for a company to give everyone $25 just as a start up bonus? Even when the threshold limit is $200, with the other silly money they are proposing to complete minor activities, it’s just not good business sense. They will not be making money just because you’ve referred somebody to PaidLeaf, so how could they pay you $30 for doing so.

You need to think straight and put your logical hat on. Find that legitimate way to make money online, instead of chasing after scams luring you in with claims of big riches.

← How to Prevent College Debt and Secure Your Future Cash Allies Review (No Cash - No Allies!) →