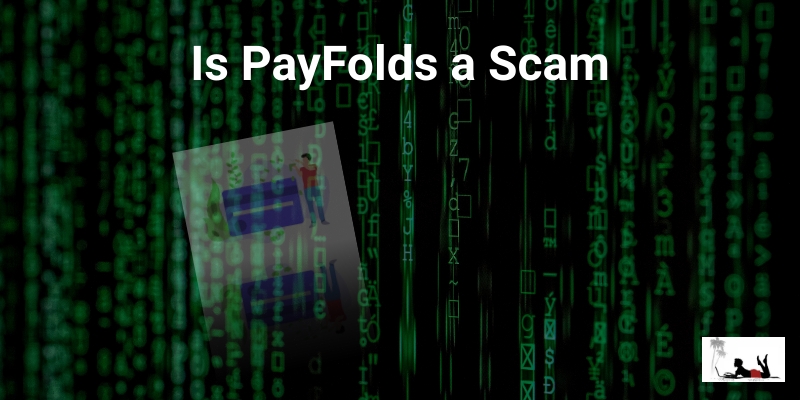 If you’ve been tempted to sign up to PayFolds and earn some extra cash from this site, I’d urge you to read this PayFolds review first. It’s not exactly what it seems, and your research here will be well worth while.

Although we’d like to believe that this is a legitimate site to make money from, the reality is different. Your suspicions that PayFolds is a scam are correct, and no money will be forthcoming from this site.

For a more comprehensive explanation, read the full PayFolds review below.

Program Summary: In my opinion, this site is a waste of your time. It’s a replica of many others sites that have been proven not to pay out their members.

PayFolds is just another in a long line of cloned scam sites. The whole idea of PayFolds is to entice as many people to sign up as a member of their platform. By doing this, the owners of PayFolds will gain access to the personal information of these people, and can use it in several ways.

To lure people in, they claim you can make a minimum of $150, and up to $750 per day. Although depending on which part of their website you read, you could earn up to $1000 per day. I couldn’t blame you for being enticed by this, but unfortunately, this site will not pay you out.

So, you’ll apparently be earning money by completing a few tasks and recruiting other people to this same platform. This sure does sound like an easy way to make a lot of money. As I’ve stated though, you’ll be left disappointed when you attempt to cash-out.

Here’s a look at how PayFolds really works.

This website which has been named PayFolds is a replica of many other websites that have been circulating online since early 2019. I don’t know who is behind these sites, but I do know that they don’t pay out their members.

The way these sites work, is once you enter the members area, you’ll be granted access to the Task Wall. This is an area which will have several tasks you can complete, which will earn you a dollar value.

Every time you complete a task, this dollar value will enter your ‘PayFolds’ account, not your personal account. You may also refer other people to PayFolds, which will earn you $15 for each referral.

Once you reach the $150 threshold, you can then attempt to cash out. This is where things get ugly, as they claim your account is fraudulent, and therefore your account has been suspended or cancelled.

I’ll place a list of all these replica sites a little further down the page. I’ve written reviews on many of them, so you can go and check out the comments and images of inside the members area.

If you think logically about it, what sort of website could possibly pay you $15 for referring one person, when they don’t pay anything to sign up. It doesn’t make sense, and no company could afford to do this.

There’s always a few signs when a program or product is not authentic. Here’s a few concerns you may want to keep in mind if you decide to give PayFolds a Try.

The PayFolds site has a video testimonial from an alleged guys named Erik Danford from the UK. If you didn’t know any better, you’ve just assume this testimonial was legitimate. However, I’ve seen him before alleging he’s used a product.

This guy is actually a paid actor. He outsources his services as a video spokesperson on a website called Fiverr.com. Here he is with a snippet of his Fiverr profile

So he will get paid from whoever is behind this scam, just to make the PayFolds site look more authentic.

Now you know, you should have second thoughts about any other get-rich-quick sites.

The video testimonial is not the only fake. If you check under the Payment Proof menu, you’ll see various testimonials with images attached. These are also not real.

Take the middle image of the guy with his bicycle for instance. Apparently this is William Espinoza, a professor from Baylor University who has Earned $29.4k+. But this is not true. 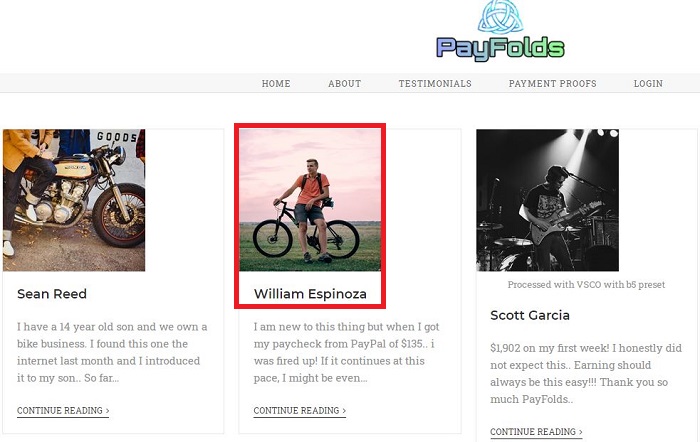 This is a stock image that anyone can use from a website called Unsplash. I did a reverse image search which declares that this image has been used 129 times online, and is available 3 times on stock image websites. 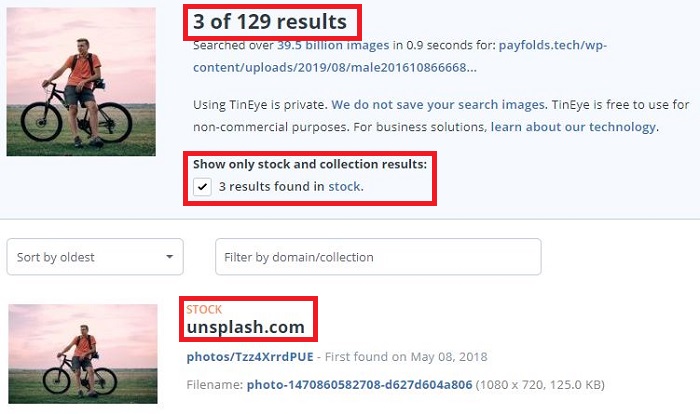 The same goes for all the other images used as payment proof. 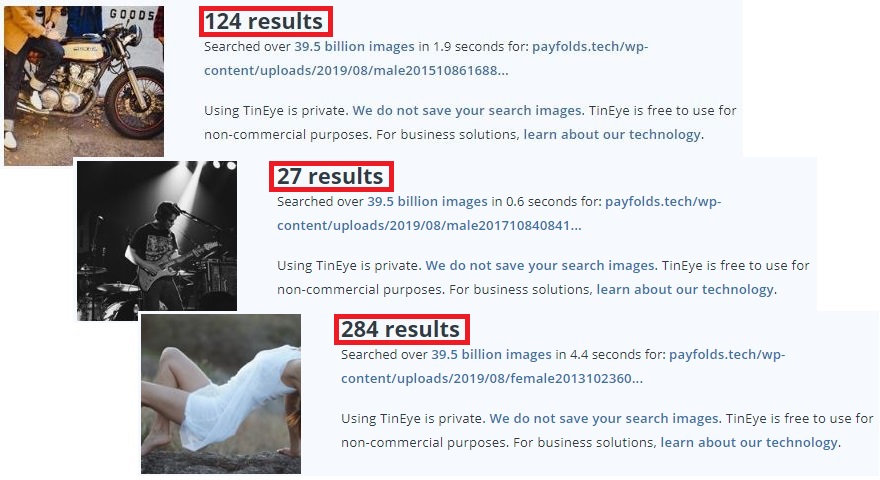 This is not payment proof at all. In fact I’m giving you proof that this is all fake.

So, we’re also lead to believe that PayFolds was founded in 2013. This is what they tell us on their ‘About’ page.

This again is not true. Having checked when their domain was registered, it states 24th August, 2019 as the first registration date. 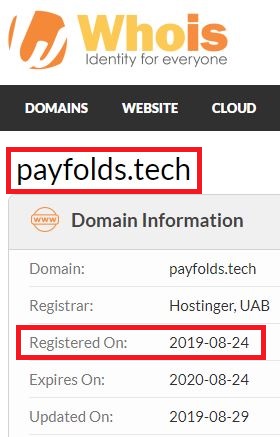 Are you starting to have second thoughts about PayFolds? If not, you should be.

Yes it would make sense, buy PayFolds don’t have any social pages. They have links at the bottom of the homepage for Facebook, Twitter, Instagram and RSS feeds, but none of them link to anywhere.

What sort of Social Influencer Network would have ZERO social pages!

As I’ve stated earlier, PayFolds is a replica of many other sites. Some of these may appear different externally, but the membership areas are almost identical. The last one I reviewed, Paid to Flex, had a slightly different look to the members area, but they all achieve the same thing.

Here’s just some of the cloned replicas that I’ve reviewed:

I’ve also reviewed many others, but I’m sure you get the picture. These have all been created by the same faceless owners, in (what I believe) is an attempt to steal your personal information.

Yes, PayFolds is a scam. There are just too many signs that indicate this is so. With fake testimonials, replicated sites and a fake founding date, what else are they going to lie about.

You’ll notice I’ve reviewed Notion Cash as one of these replicated sites. The BBB (Better Business Bureau) issued a consumer alert recently about these exact sites not paying out. They even mentioned Notion Cash in their article.

So please be aware if you come across any other websites that look similar in nature to PayFolds, Influencer Cash or Click4Kash. They are all scams and will not pay you out after all the hard work you may put in.

It’s really deflating after putting in so much effort, only to be duped on payment. There are realistic opportunities to make money online, but the ones that sound too good to be true, generally are.

Is There A Better Option

Sure, there are better opportunities to make money online. But…you’ve got to stop looking for get-rich-quick programs. Nobody is going to give you loads of money for little effort by completing a few minor tasks.

You can keep searching for that needle in a haystack if you want, but you’ll never find it. In my opinion, you’d be better off trying to build yourself a sustainable solution that will bring in money for the long term.

This doesn’t happen overnight though, you need to work at it. But, once it does kick off and you start to see results, the rewards are worth the effort. And, the money just keeps coming in, because you’ve initially put in the effort.

Read on below to see how I make money online with this exact method.