Is Six Figure Empire a Scam (An Expensive Experiment) 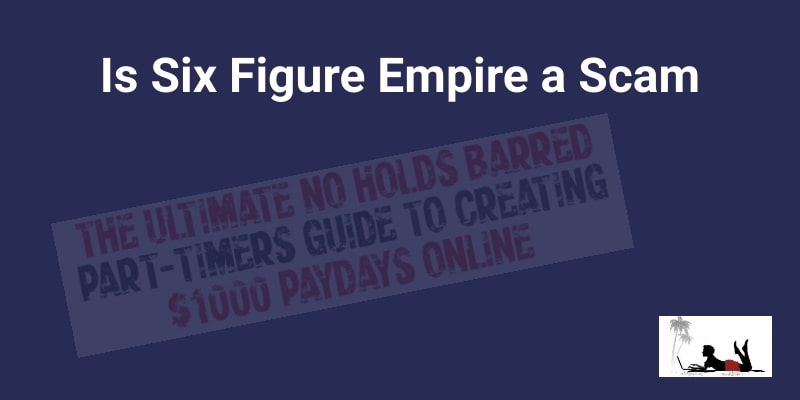 ​I’ve recently been alerted to a program that claims you can be on a path to retirement in 100 days, spending less than 1 hour per day. This does sound a little too good to be true, so is Six Figure Empire a scam, or can it really be done.

Program Summary: In my opinion, this is a very risky model to earn money online. Due to the high ticket returns, you’ll outlay thousands of dollars with no guarantee of consistent returns. Referrals will be very hard to attract.

Would I Recommend It: Only if you like taking high risks.

What is Six Figure Empire

Having gone through the entire process that takes me to the Six Figure Empire purchase page, I cannot give my seal of approval that this system will make you any money. I’m not saying Six Figure Empire is a scam, but it’s a risky program that I wouldn’t be entering into, and I’d be advising against it.

Watching the sales video will have you believing that it’s easily possible to earn at least $1000 per day with only 1 hours work with Six Figure Empire. This is all without having to pitch anything, or close any deals with anyone. They claim this because it’s apparently all done via a funnel, that takes prospective referrals to their own sign up page. All you need to do is direct referrals to Six Figure Empire.

So by signing up, for a very large fee mind you, you’ll be given a landing page website that will capture email addresses, then redirect your visitors to the Six Figure Empire site to sign up to what you’ve signed up for.

There is no actual product that is being sold, just a circular MLM type funnel of money.

The outlay is quite extortionate, as the minimum amount to join Six Figure Empire is $1,000, plus a $29.97 monthly fee to keep in the system. You’ll be encouraged to increase your input amount to $3,000, and then another $5,000. Each of these providing larger returns for you, and any sponsors you sign up.

So, does Six Figure Empire work, or fail miserably.

How Does Six Figure Empire Work

I’m very sceptical about programs like this, but I’ve seen worse. At least Tim Berger attempts to explain the system in his videos, unlike other MLM programs I’ve reviewed that are outright scams.

Tim claims Six Figure Empire is the most powerful high ticket compensation plan ever unleashed. What concerns me, is that I’ve seen other similar high ticket programs, that have been shut down. There was a program doing the rounds a few years back called MOBE (My Online Business Empire), which worked in a similar way to Six Figure Empire. Eventually, the FTC shut down MOBE, you can read the story here.

Just like MOBE, Six Figure Empire are also going to charge you a monthly fee. This is a cost of $29.97, which will most likely go to Tim Berger. I was going to suggest that Tim will have some overheads such as website hosting, but nope, you’ll be paying for this. So the monthly cost will be a nice little side earner for Tim.

So, how are you going to get your referrals for Six Figure Empire. This is the big question, because without referrals, there is no money for you. Let’s look into that.

How Will You Get Referrals

Website traffic is the hardest part of any online income system. I use affiliate marketing as my income generation method, and use SEO to rank my articles in the search engines, such as Google. This is the cheapest form of website traffic, it costs me nothing.

You won’t have that luxury by joining up with Six Figure Empire. That’s because it does take time to rank in the search engines. Tim understand this, which is why they will be suggesting paid and social advertising.

The problem you’re going to get with social advertising, is that you’ll be nagging your friends and family with your promotional material for this high ticket MLM system. Alternatively, you could start your own Facebook Fanpage, but this will take a long time to gain any traction. Paying for paid ‘Likes’ is one way to get more promotions in front of more people, but will they be the right people to join.

Paid advertising will be another associated cost. I’ll mention this below, but targeting the correct people in paid advertisements can also be challenging. Sure, you will have specific targeting options, especially through Facebook as they know everything about everyone. But even Facebook adverts have to learn what your advert is, and configure it to the target market you’re after.

This can take up to a week sometimes, and then you may have targeted wrong. Then you need to create a different campaign and wait for that advert campaign to mature. I’m not totally against paid advertising, but I wouldn’t be testing this with such large amounts of money at stake.

So if I was forking out thousands of dollars, I’d want to see results pretty quickly.

Firstly, I’m going to mention that it seems the costs have gone up since Six Figure Empire was first introduced. No longer are the fees $1K, $3K and $5K, see below the different membership levels. 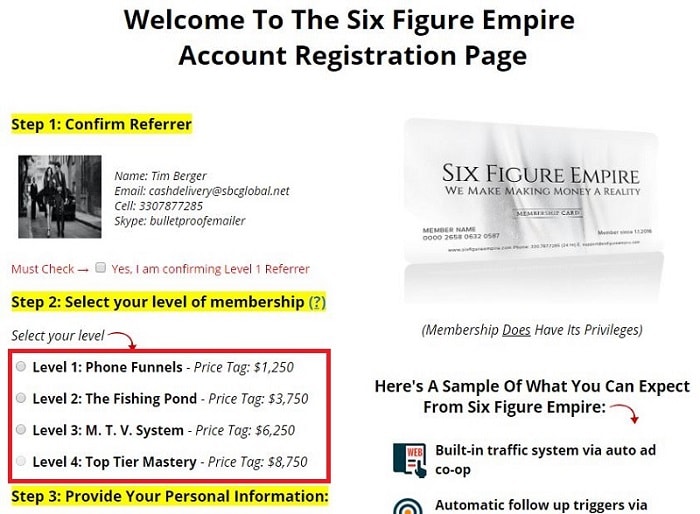 As you can see, there are now 4 levels of membership which is very misleading if you’ve just followed the sales funnel. The Six Figure Empire sales video and sales page both state the costs starting at $1K, and the highest at $5K. With this no longer being the case, I’d expect many potential customers to this system to be confused and walk away.

If the funnels that they give you are similar, then you will have a very hard time getting any referrals yourself.

Anyway, onto the costs of this membership. Apart from the above high ticket fees, you’ll also have to pay:

I’ve added a landing page service to the above list for this reason. The system you’ll be provided with will be the same template for anyone that signs up to Six Figure Empire. To stand out of the crowd and make your offer shine, it may be advisable to use a lead capture service.

So, all in all, this is not a cheap model of making money. In fact, in my opinion, it’s a very risky model.

​Okay, my honest opinion about Six Figure Empire. While I don’t believe this to be a scam, I do believe it to be a very risky model of making money. Your initial outlay is going to be fairly hefty, so you’ll want to be making that money back quick smart. I don’t believe this will happen.

I’d also be very wary that it may follow in the footsteps of MOBE and Digital Altitude, another shutdown program. Whether you consider it legitimate or not, the FTC may have other ideas.

I wouldn’t be recommending Six Figure Empire to any reader of mine due to the high risk involved. However, if you’re interested in this type of program and are prepared to take the risk, you may end up making money. And if you do, I’d really like to hear your story and your experience with Six Figure Empire.

I imagine you’re here because you are searching for a method to make money online. You may come across multiple opportunities that claim unrealistic earnings. I’d urge you to be careful about what you sign up to.

You may find that creating a more sustainable online business model such as affiliate marketing or ecommerce drop shipping may be more suitable. The startup costs will not be as much, and yes, they do take a bit of work. But although it’s not mentioned in Six Figure Empire, you’ll be doing a lot more work than the 1 hour per day they claim.

I hope I’ve enlightened you a bit more into the Six Figure Empire MLM system. If you’ve had experience with this program, I’d be happy to hear of your results.

What is Savage Affiliates by Franklin Hatchett (AAA Review)
Is Bluehost Still Popular in 2020 (The Stats Are In!)
What is Online Marketing Classroom: Does it Pass The Test