Is Six Figure Success Academy a Scam: (Or Just Over-hyped!) 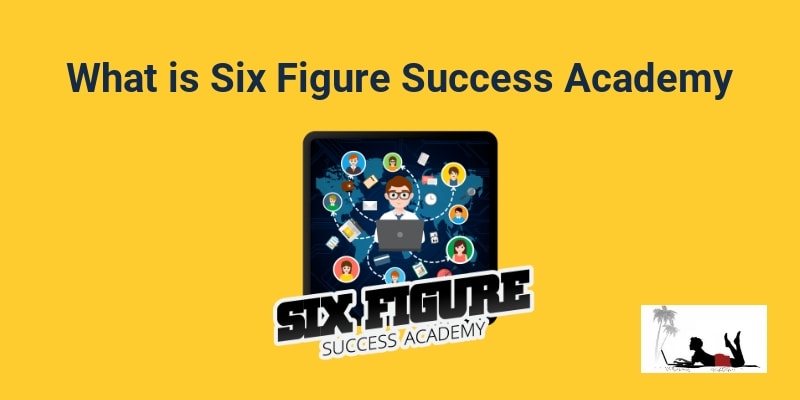 This course called Six Figure Success Academy is searched many times on Google, and you’re here because your wanting to know what’s actually included in the course. I applaud you for doing your due diligence and looking at these types reviews, especially this one. You’ll be glad you did.

I’m going to take you through the following sections, so you can make up your own mind. You’ll understand what my thoughts are throughout.

Program Summary:In my opinion, there are so many better programs available, and much cheaper.

Would I Recommend It: No. More legitimate programs out there.

What is Six Figure Success Academy

In a nutshell, Six Figure Success Academy is a course that will attempt to teach you how to create wealth, through creating Webinars for existing courses, and earning commissions directly through the course creator.

So, instead of the traditional method of affiliate marketing, this is effectively earning higher affiliate commissions, but you’re convincing the owner of a particular course to remove the course from the current hosting platform, to a different platform, and selling it at a higher cost.

It’s about convincing the existing course owner, that you’ll make them more money by moving their course elsewhere, and you’ll get them much more traffic. You’re also convincing them to charge a higher fee, so you both get paid more.

I’ll go through the Six Figure Success Academy course structure, and you’ll get an idea of how it will play out. Below is a very long video that attempts to explain how good this course is. Don’t go ahead and purchase until you’ve read my full review here.

Six Figure Success Academy From The Inside

I’m going to explain what you’ll find on the inside of Six Figure Success Academy, so you can compare it to other programs such as my preferred recommendation. 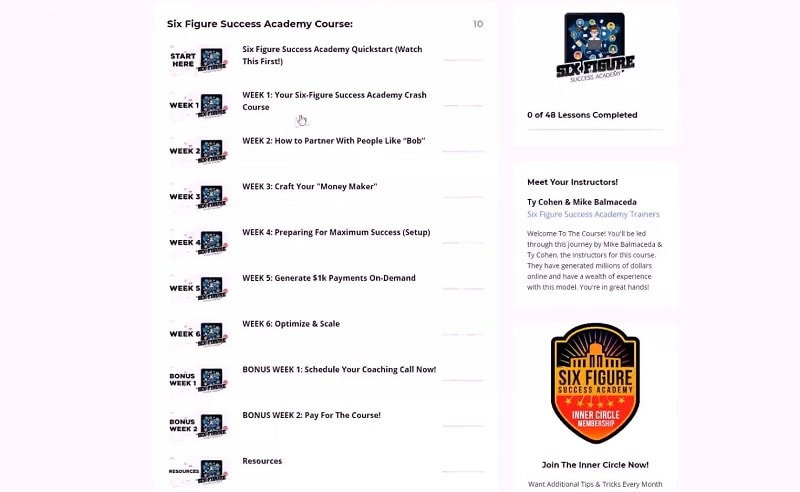 Week 1 – Crash Course – You’ll start off with this series of 12 videos, 2 of which are just welcoming you to the course and outlining the Six Figure Success Academy course structure. The other videos show the methods of how this system is going to create an income, how your mindset will have to shift from the traditional, the tools required to get started and which niches will be profitable for this method. The main focus of this system is to create webinars, promoting already made courses.

Week 2 – How To Partner With People Like ‘BOB’ – The second week runs through how to find a “Bob”, an existing course owner willing to take up this sort of opportunity. If you can get a course owner to accommodate this request of yours, you’ll be learning the next steps that you need to cover.

Week 3 – Craft Your “Money Maker” – This is where you’ll learn to write a webinar script for the course, including ‘Bob’s’ role. You’ll learn about the script that’s required, which they call the ‘10m+ webinar script’. That’s certainly misleading! There’s video’s in relation to  understanding the customer, and analysing successful webinars. Which basically just tells you to copy what others are doing.

Week 4 – Preparing for Maximum Success – Week 4 of Six Figure Success Academy discusses presenting and setting up your webinar. It also includes how you’ll split the proceeds with the course owner, and collecting payments. This is also where you be told to use the best software, GoToWebinar. Yes this is the best software, but you’ll also be advised that the course owner will pay this fee for you. Really!

Week 5 – Generate $1k Payments on Demand – This course tells you who qualifies as a good potential affiliate. Which is obviously someone with a large following, such as an influencer. So, instead of generating traffic yourself, you’ll be reaching out to influencers, and attempting to convince them to share this webinar you’ve created. You’ll be offering a commission to this influencer for their trouble.

Week 6 – Optimize & Scale – As the next week title suggests, you’ll be watching a few videos on how to scale this affiliate marketing method. You’ll be told there’s a domino effect, because you’ll be asking the influencer for their contacts, so you can get them to promote this webinar. Just like that!

Bonus Weeks – Case Studies -You’ll also be shown case studies here, which are basically slides that could have just been made up. One of these states they’ve made $16,349 in 100 minutes. Sorry, but I find this very hard to believe. Another (the image below) says $40,000 in 5 days! Oh, but they tell you they did it while watching Netflix, and on a cruise in the middle of the ocean….please! 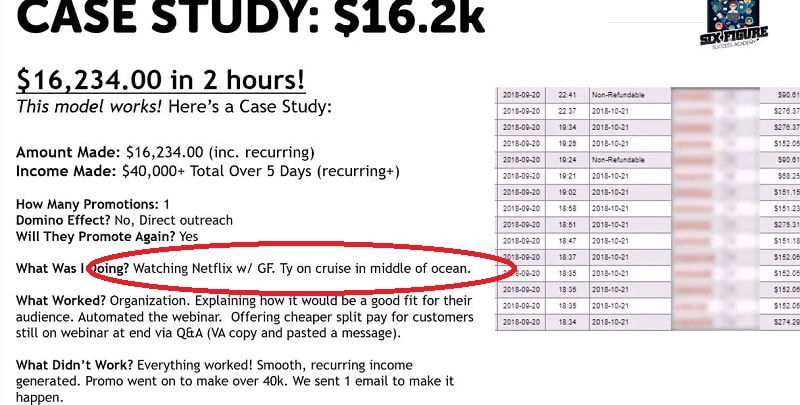 There are no internal tools. You will find external tools that these guys recommend, such as GoToWebinar and ClickFunnels to create a lead capture page. But don’t expect the course owners that you’ll be contacting, to pay for these, as suggested in this Six Figure Success Academy course.

As far as support goes, there’s a Facebook group like every other course has, and an email address (info@SixFigureSuccessAcademy.com) for direct help.

Too much! Don’t need to say anymore do I? This Six Figure Success Academy course is not worth anywhere near $1K, in fact it’s way overpriced. It seems the guys have taken their own advice, and are charging at a premium, just like they suggest to course owners.

Not much to be honest.

The model of wealth creation in this course is effectively affiliate marketing. It’s just done in a different format than the traditional method of signing up to affiliate programs and networks.

Affiliate marketing is a totally legitimate method of making money online, it’s how I make money from this website. The course suggests you contact courses owners, to have exclusive rights and negotiate a 40%-60% split. Whilst it’s possible, I’m not convinced it’s likely.

What Puts Me Off Six Figure Success Academy

At one point in the series, you’ll be shown templates to write to course creators. One of the templates suggests that you have access to influences and leaders in your market. This is not true. Another suggesting you can reach out to power houses that can bring in more sales, another untruth.

GoToWebinar is one of the software programs that you’ll be advised to use. The cost of this is $89 US per month, which is for up to 100 participants. The guys at Six Figure Success Academy, say not to worry about the cost, because the course creator that you’re working with will pay the lot. Really! They have no idea if the course creator will pay this cost.

There’s no integrated features here, this is purely a training course that runs you through 7 steps to achieving your objective. There are external programs suggested, including ClickFunnels, which will apparently drive these sales.

Unfortunately, there’s no tools or resources to help you drive traffic. Without any website traffic, you’ll be hard pressed to make any sales. Oh yeah, the influencers will do all the work for you!

The course focuses on how to deal with course owners and webinar setup. But fails miserably, as it doesn’t even touch on how you’ll get these webinars to eyeballs, except for attempting to convince leaders in the market to spread the word. It’s suggested not to upload the webinars to YouTube, instead use platforms such as Vimeo to host your webinars.

How though are prospective signups going to find these webinars you’re creating. You’ll be going to a lot of effort for little return should you not have an effective traffic generation strategy, and influencers don’t take up your offer.

If you already have traffic coming to your website, this could possibly work. I’m loathe to suggest this course doesn’t work at all, but I wouldn’t be recommending Six Figure Success Academy.

Is There a Better Option

As suggested earlier, affiliate marketing is a great method to build a business around. It’s sustainable, and only becoming more popular with the increase of more companies offering an affiliate partner program.

There are several online affiliate marketing courses, but only one stands out for value. This is because it incorporates tools and resources within their platform, and you can even have your website hosted with them, which is included in the membership cost.

It’s called Wealthy Affiliate, and you can read more about WA here.

Ever Thought of Making Money Via Affiliate Marketing

Firstly, Six Figure Success Academy is well overpriced, especially for what is included. As these guys have suggested to other courses owners, set the price at a premium. Well, they’ve taken their own advice here, but obviously weren’t getting the sales they expected at the original price.

If you’re looking to get into the affiliate marketing space, my advice would be to check out Wealthy Affiliate for free. You can sign up without having to attach credit card details, which is ideal to see if it’s what you’re after.

Six Figure Success Academy is not a course I’d be advising you to take. There are many other more legitimate programs to consider.

← What is Drip Academy: On The Egde How SEO Can Help Your Affiliate Marketing →