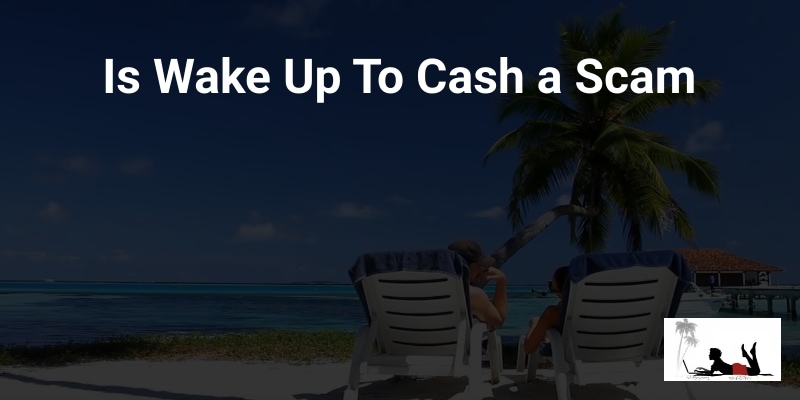 Wake Up To Cash Review

I’ve recently been alerted to a site called Wake Up To Cash, which claims you can make loads of money in an exceptionally short time frame. Obviously, I became sceptical and just had to check this out for myself.

Many of you maybe wondering, is Wake Up To Cash a scam, or can you legitimately make money with this system. I’ll be offering you my unbiased opinion about this product, as I have no affiliation with Wake Up To Cash.

So, let’s dive in and see what Wake Up To Cash is all about.

Wake Up To Cash Update

As an update to the Wake Up To Cash scam, this no longer exists. The scam was exposed by myself and several others, and they have since dropped their wakeuptocash.com domain. The domain has now been bought by somebody else, and is a legitimate bog. Unfortunately, the history of the domain may not work in their favor.

Wake Up To Cash Summary

Product Name: Wake Up To Cash

Program Summary: In my opinion, this is a misleading sales video, that will lead you up the garden path. You’ll be redirected elsewhere, to buy a totally different product. Stay away.

What is Wake Up To Cash

Well, you’d be forgiven for thinking this website is promoting a system that will make you thousands of dollars every single month, with only a small amount of work. I’m certainly glad you’ve stumbled on this review, because you’re going to the the unbiased truth.

Much like most sales videos from unethical websites, you’re going to hear a rags to riches sob-story about how James Wendell, the apparent owner, made himself wealthy. And he’s such a nice guy, he wants to help you get rich too. So he’s created a system, where you’ll only have to work 30 minutes per day, how nice of James.

What you may notice when watching the sales video, if you can be bothered watching the whole 25 or so minutes, is that James doesn’t tell you what the product is. He keeps telling you how this system will change your life, the fancy cars you can have and wonderful lifestyle, but how are you going to achieve this?

You’ll hear from multiple people offering their testimonials, saying they’ve earned huge sums of money with such little effort, all thanks to James. But there’s still no inkling of a product.

Now, I’ve seen many other products just like this that won’t disclose the product they are selling. Products such as Point 2 Click Profits and Copy My Email System. I’ll tell you why they don’t tell you the product they have. Because they switch the products when people find out it’s a scam.

How Does Wake Up To Cash Work

First of all, I’d advise you to never purchase a product if you don’t know what it is you’re getting. You need to see an explainer video of the actual working product to be confident there is something behind the hype.

Which brings me to the sales video, which is so full of hype and huge claims. Unfortunately, you’re not going to have the same results of those testimonials, which I’ll get to a little later.

You see, as I previously mentioned, the product in question has been changed recently. This website used to send you to a program called MOBE, which was an unethical program that sells high ticket programs. The kicker here, was that you had to pay thousands for the rights to sell these MOBE products. In 2018, MOBE got shut down because of their unethical practises, so ‘Wake Up To Cash’ had to find a new program to direct people to.

Along comes MTB (My Traffic Business). This is the new alliance that you’ll be directed to, which is is a step by step PDF guide to building an email list. Hardly sounds like a push button system that will make you thousands of dollars per week does it. The guide itself is called ‘List Building Excellence’, which costs you, you guessed it, $47. 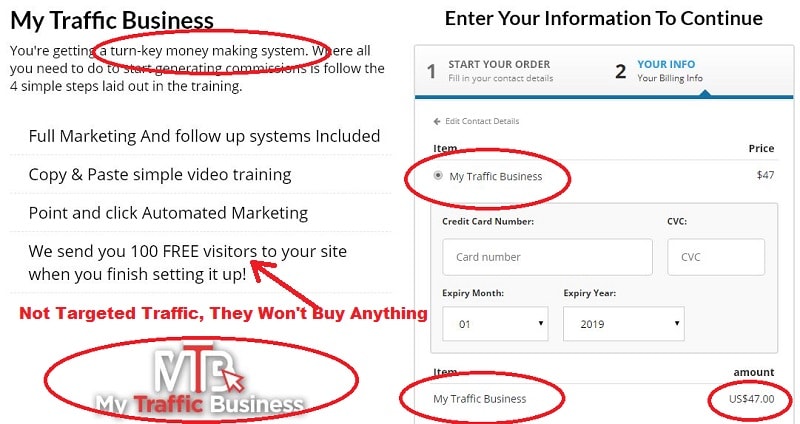 So basically, when you sign up to ‘Wake Up To Cash’, you’ll now be directed to ‘My Traffic Business’, which will sell another product called ‘List Building Excellence’. This is a circular exercise, and each party will make a cut from your $47. Then, you’ll constantly be sent emails to purchase other products, because the initial one won’t work.

The image above was what I was presented with, when I attempted to make a purchase of ‘Wake Up To Cash’. As you can see, ‘My Traffic Business’ is the product I’d be purchasing. See how they say you’ll get ‘100 FREE visitors to your site’.

Firstly, you’ll have to create a website, this is not mentioned anywhere in the sales video. Secondly, these 100 Free visitors will not be targeted traffic. Meaning they will have no interest in what promotions you have to sell.

Will You See Results With Wake Up To Cash

No, you will not see results from purchasing this guide. You may get some decent information from the guide. Afterall, building an email list is a great way to make money, but it also takes a long time.

To build an email list, you first need some kind of platform such as a website. You then require informative content on your website so people want to visit it. They can’t visit your website if they don’t know of it, so you either need to learn SEO to get ranked in search engines such as Google, or pay for advertising to get visitors.

Once you do get visitors, you’ll need some sort of giveaway to give to your audience, similar to my Ultimate Beginners Guide to Affiliate Marketing. This can be given away in exchange for a visitors email address.

So clearly, there’s more effort required from you to setup this system, than just a point and click system that ‘Wake Up To Cash’ promotes.

Now to start with, you’ll probably notice the banner pop up like below. 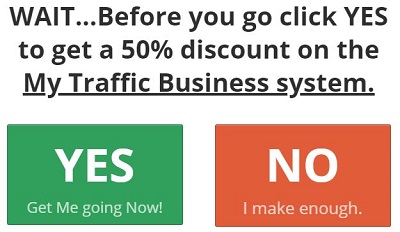 But wait, you didn’t sign up for ‘My Traffic Business System’! So this is the first red flag you’ll notice.

The sales video is going to state some outrageous claims. You’ll be told ‘The Help you’ll receive from me and my team is 100% proven and guaranteed to work’.

This is not true, and you won’t even get help from James. Remember, he’s redirecting you to another site to buy a different product.

Another bold claim James makes, is that ‘you’ll barely lift a finger, spending 30 to 45 minutes per day at most!’.

Now clearly this can’t be true, because the said program changes from time to time. The current program, a PDF document that helps with list building, is going to take much more work than is stated. It doesn’t give you a website, so you’ll need to build that to begin with.

Plus, how on earth can you be expected to create wealth with only 30 to 45 minutes work per day. Even the best programs worth thousands will not allow you to have this freedom.

Other bold claims are laid out below:

What a load of garbage all these statements are. They are totally false, and should not be taken seriously.

Now, About Those Testimonials

You’re going to come across over 12 video testimonials that claim they’ve used this product. I’m going to prove that this is wrong, and that these people are getting paid to advertise Wake Up To Cash via a video testimonial. As you can see below, this girl is just one of the testimonials. Below this snapshot, is her profile on Fiverr.com, where she’s advertising herself as a spokesperson. 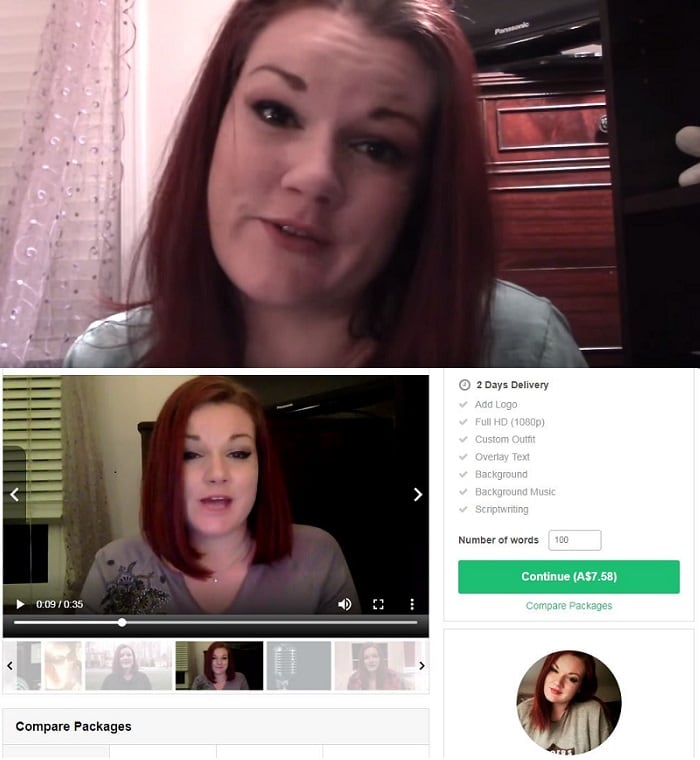 She is just one in a whole host of spokespeople. You’ll also notice this lady, who’s been promoted on a number of other products. 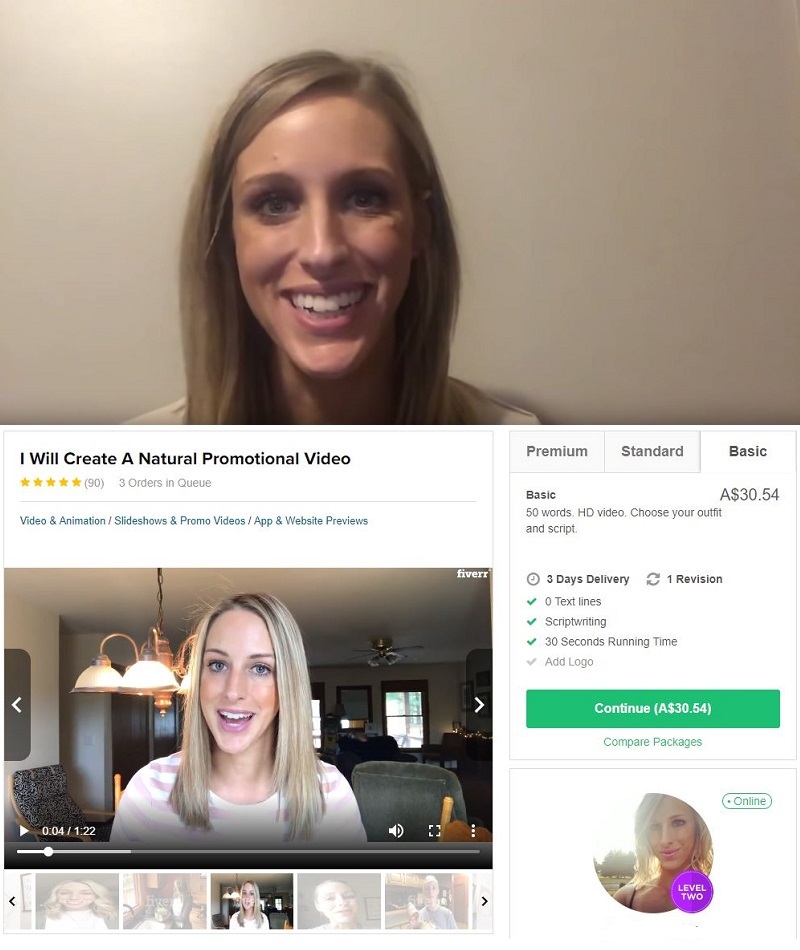 If you look at my review of 7 Minute Daily Profits, you’ll see this lady is used as a testimonial here also. I hope you get the picture here, that not all testimonials are true.

Having explained the process of getting your audience to sign up to your email list, I hope you understand that it’s not as simple as Wake Up To cash says it is. In fact there’s also another cost to you, because all of us marketers sign up to an autoresponder service to capture these emails.

In fact by the time you read this Wake Up To Cash review, they may be redirecting you to a completely different program. My advice to you, is to avoid this program at all costs. They do not have your best interests in mind, and you’ll be scammed out of your hard earned money.

Making money online is possible, but you’d be better to follow the methods used by successful marketers. There’s no need to change the system that already works, and I’ll show you what works for me.

A few years ago, I joined a program that would set me up to become a successful affiliate marketer. This allows me to work from anywhere that has WiFi, but I still need to work. There’s no such thing as a free lunch, and you will not get anywhere if you don’t put in some effort.

Basically, I write my blog and advise people of some great products that can help them get ahead. These products make me a commission every time someone makes a purchase. I don’t promote rubbish, only legitimate programs. This gives me credibility, and return visitors because of my honesty.

The great thing is, anyone can learn to be a successful affiliate marketer. I didn’t know anything about affiliate marketing before I started. It’s something you can learn as you go along. You can check out the course structure of this program here.

I’d certainly urge you to stay away from these type of bogus websites. They are full of hype, huge claims but very little substance. This product will not help you…wake up to cash. While it’s possible to make money while you’re sleeping, it doesn’t just happen overnight, so to speak.

You can learn how I make money online by clicking the ‘Get the Guide’ button below, which will advise you of the top affiliate marketing training program in the industry. It’s also the best value for money, as you can even host your website which is all included in the membership fee.

Thanks for reading my Wake Up To Cash review, I hope it’s helped you make an informed decision.

Learn to Make Money With Affiliate Marketing (Become a Wealthy Affiliate)
Where to Find Free Web Design Graphics: An Awesome Resource!
How to Set Up an eCommerce Website: The DropShipping Phenomenon!