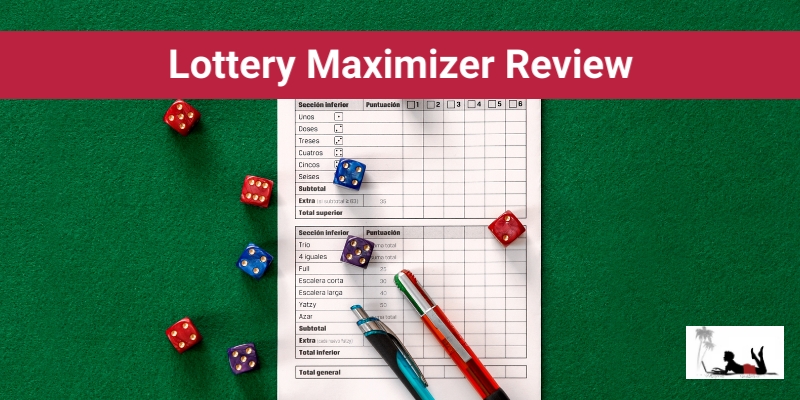 Do you really think that a lottery system can beat the odds? Is it really possible to beat the casinos at their own game, and win the majority of times that you play. If you do, then Lottery Maximizer may be just up your street. In other words, you believe what you want to believe.

If you think if can work, you’ll keep trying until you run out of money, or you finally get a minor win. Or should I say loss.

Anyway, you’ve come here to find out if Lottery Maximizer can make you a winner at lotteries. To save you the trouble, I’ll declare that I don’t believe you’ll make anywhere near the winnings claimed on the Lottery Maximizer sales page. I’ll discuss a few things here that will show you why this program may not be your saviour.

So, let’s get stuck into this Lottery Maximizer review.

Program Summary: I don’t believe it’s possible to beat the casinos at their own game. Yes, you may have a win here or there on lotteries, but you don’t need to purchase this ‘system’ to achieve this. I believe you’ll have as much chance of winning if I give you some numbers.

What is Lottery Maximizer

I’m not here to just put down every new product, but I will call out those products that I don’t think give people a fair chance at success. I will put Lottery Maximizer in this category, because I see this program as taking advantage of others.

So, you’ll see loads of fancy images of winners with new cars, big cheques and photos of what Richard has been able to buy since winning lotteries.

I have no doubt that Richard Lustig has won 7 lotteries in his lifetime. These have been state lotteries and his winnings have totaled just over $1 million dollars. However, his last win was in 2010, which is a long time between drinks.

How Does Lottery Maximizer Work

The Lottery Maximizer program is a simple updated rehash of an old system Richard Lustig created. It used to be called Lotto Annihilator, Lotto Dominator and Lotto Processor. More recently it was called Lottery Loopholes, and now we’re looking at Lottery Maximizer.

Richard Lustig claims he has a software system that will produce a set of numbers that you can use to win the lottery. Apparently Richard has used mathematics and various methods to win lotteries.

These methods had been analyzed from a panel of specialists, until they figured out how to create this special software. It has a built in formula which is based on previous winning jackpot patterns.

So this tool can be accessed from any computer, smartphone or tablet, and will work for anyone around the world. It all sounds pretty convincing doesn’t it, but what are your real chances of success?

There’s been many sceptics about Richards formulas, and for good reason. While I won’t say that you will not win the lottery when using this formula, I believe you’ll have just as much chance as me giving you a set of numbers. It’s not the software that will get you a win, a win may just come by chance.

Richard generally uses a series of sequential numbers, which can possibly be more inferior than using random numbers. Part of the system involves reinvesting his winnings to attempt to win more, but the whole idea of being a winner is to reap the rewards. This is not a business venture.

I’m sure you understand that lotteries are a game of chance. The odds are stacked against you for a reason. Lotteries have been successful for many many years, and are more difficult to win nowadays than they used to be.

Extra numbers have been added to lottery pools over the years, making the odds so much harder to beat. Of course people still win, somebody has to eventually. But using a formula to choose numbers in my opinion, will have just as much chance as a quick pick.

Along with the initial system that Richard sells for $97, you’ll also be encouraged to buy two other products.

The first being ‘Richards Lottery Secrets Book, which will offer 128 pages of Richards top secrets. This will set you back $47.

The second being the ‘Scratch Off Secrets Exposed Digital Book’ for $37.

So, even though you’ve got his system for producing winning sets of numbers, there’s additional information you should buy. The question I’d like answered is, why are these products not included with the software.

If I’m going to be paying $97 for a system that has not won Richard the lottery since 2010, then maybe his system doesn’t work like he says it does, and should include all his informational products.

Call me a skeptic, but I’m really not convinced about lottery systems. I believe that although Richard did win some decent sized lotteries, he’s cashing in on this fame. Here’s a few concerns that I have with Lottery Maximizer.

At the base of the Lottery Maximizer Splash page, there is a legal disclaimer that you should read. It states “Most of Richard’s Lotto Processor customers will not win the lottery, and you should not expect to win the lottery by purchasing Richard’s Lotto Processor or following the program. These testimonials do not reflect the typical user’s experience”.

Although this disclaimer is to cover Richard should you NOT make any money, it also suggests that you will not make any money with the Lottery Maximizer software system.

This disclaimer would immediately inform me not to purchase this product.

As I’ve stated earlier in this Lottery Maximizer review, there have been lots of other names for this program. Here’s just a few of the names.

You can also see in the legal disclaimer above, I’ve underlined where the wording has been copied from the Lotto Processor page.

This often happens when a product creator is not making enough sales or getting bad reports. They resort to renaming the product under a different brand to give it a fresh kick start. Maybe Richard has run out of cash and his lotto formulas are no longer working.

After all, if you have this brilliant system that you could rely on to win the lottery, why wouldn’t you just keep it to yourself. If I had such a system, I’d be using it to constantly win the lottery myself. Just maybe, there is a flaw in the system, hey!

Not everyone is convinced about Richard Lustig’s program. I’ve read a report on Business Insider that is extremely skeptical. The article by Stacy Johnson also asks the question that many reporters wont ask, how much money did he spend playing?

She goes on to say “The number of times anyone wins anything is irrelevant unless you also know the amount they’ve lost”. This is exactly true, and no other reporter was prepared to ask this question.

There’s also some genuine points that Richard does discuss in his book, such as retaining losing lottery tickets to offset against the winning ones, which helps offset any payable tax.

I do like the way Stacy finishes off this article after explaining to Richard that his mathematical formula makes no sense. He replied “What do you think I am, an idiot?”

Stacy’s response to this: “You’re no idiot, Richard – you’re ostensibly making money selling a $40 book with nonsensical advice. It’s the people who buy it that are idiots.”

Is Attempting To Win The Lottery a Good Idea

I have no problem with anyone going out and purchasing a lottery ticket to make it rich. But only if you have the spare cash to do so.

If you really think you can consistently make money by winning lotteries, think again. Why do you think lotteries are so successful? Because the bank always wins. Yes, there will be jackpot winners all the time, but not consistent jackpot winners.

It’s a game of chance, so the chance of somebody winning twice is unusual. Sure, this has happened multiple times before, but again, it was by chance. It was down to luck.

The instances you’ll see on the Lottery Maximizer sales page are those lucky ones that have hit the jackpot twice. It does happen, but rarely.

Are There Better Ways to Consistently Make Money

Sure, it’s called work! A job will pay you a consistent wage. However, I think I know why you’re looking at the lottery system though, because you’re looking for an easy way out. You don’t want to work to earn money, you are looking for easy street.

So, are there any easier options that will pay you money without working for a boss. I guess this might be what you’re looking for.

Well yes, there are options. Ever since my affiliate marketing website took off, I don’t work for a boss. I get paid via affiliate commissions, and this website your reading is the vehicle for this.

Anyone can become an affiliate marketer, but it does take a little time to gain traction. The process is simple though. Create a website, promote other people’s products and get paid. If you’d like to learn how to do this, here’s the best place to get started.

Alternatively, selling products on Amazon may be up your street, or creating your own online dropshipping store. You could go down the sweepstakes or the filling out survey route, but I’d advise against this. The problem with these is inconsistency and very poor returns.

So look at what else is out there. Create your own new online career and learn a new skill. These recommendations do require an education, but the rewards down the track are wonderful. They can offer great returns and a freedom only traditional employees can dream about.

I’ve stated that this product has been rehashed several times, with new branding to make it seem different. In my opinion, you would be much better learning a new skill that can produce a sustainable online income. This could be affiliate marketing, course creation or eCommerce.

Whatever it is, don’t sell yourself short. Get the right education, take action and you’ll be a success. Don’t just put your monetary matters down to luck through a lottery system.