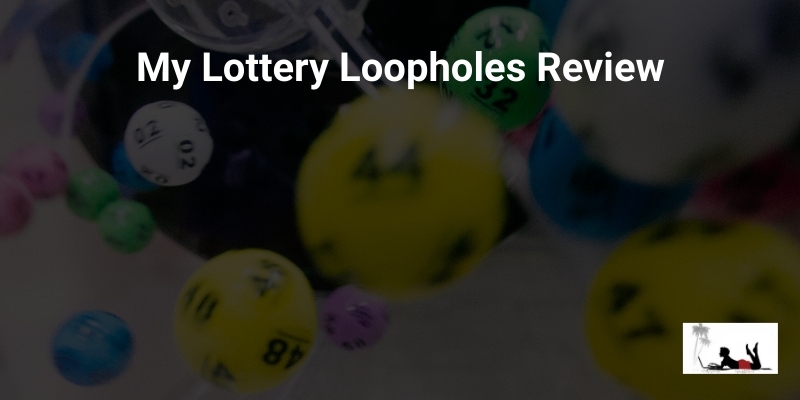 If you’ve been searching for ways to make money quickly, there’s a good chance you may have considered lotteries. Is it really possible to make money via a loophole in lottery systems. This My Lottery Loopholes review will give you an insight into the chances of success with this system.

For those in search of a quick answer, my advice would be to steer away from lotteries in general unless you have some spare cash to splash. Putting your life savings into a betting system is never a good idea.

Program Summary: In my opinion, My Lottery Loopholes is a rehashed system that has been promoted under various alternative names. I believe the strategies used may win you the lottery, but you’ll spend all your profits getting that win.

Who Is Richard Lustig

The owner of My Lottery Loopholes is a man by the name of Richard Lustig. Richard claims to have won 7 lottery grand prizes, which apparently is indisputable. These 7 prizes have won Richard over 1 million dollars. Not bad hey.

Now, having delved a little deeper into Richards winnings, there’s some scepticism as to whether the systems Richard used are winning him any money at all. That’s because there’s some conjecture that his strategy of re-investing his winnings actually means he’s in profit.

Some financial experts suggest Richard’s tactic of using sequential numbers is more inferior than using random numbers. So do we really trust a system created by Richard Lustig to invest our money. This will depend on each individual, but I wouldn’t be buying and following this system.

What is My Lottery Loopholes

My Lottery Loopholes is an attempt to rehash an older version of this same system. Apparently, it’s a piece of software that claims will help you win the lottery on a consistent basis.

If you’ve gone through the sales video, you’ll be exposed to some people who have won the lottery, not specifically with My Lottery Loopholes. Although you will get the impression that they have all been helped by the methodology system to gain the upper hand in choosing numbers that win.

You’ll hear stories of how people have exposed loopholes in lottery’s to allow them a bigger chance of success, and lots of money. It will have you believe that if you buy My Lottery Loopholes, you’ll be winning millions of dollars just like these people. Don’t be fooled by this, they have not won millions from My Lottery Loopholes.

How Does My Lottery Loopholes Work

You will never really understand what you’ll be getting into before you pay the $97 that Richard wants from you. He claims he has a system for you to follow, but this is the lottery folks. Lotteries are a game of chance that offers a very slim chance of success, no matter what systems you come up with.

I don’t believe there is anything unique with Richards software. Anyone can create an algorithm that produces a set of numbers, and that’s all you’ll be getting here.

If this system was so authentic, and has proven results with multiple millionaire winners, then we should be hearing about these actual people. The examples used are people that have no association with My Lottery Loopholes.

And while I’m mentioning the credence of this system, why doesn’t Richard just keep attempting to make money with his own software. Instead, he’s making money by taking $97 from each individual that buys his My Lottery loopholes product.

I have a number of concerns that alert me to this being a bit of a scam. Here’s some red flags that I’d like you to consider before parting with your hard earned $97.

It’s also been released under various other names, with some having the same sales video, and others having a similar sales video. They all however, offer the same algorithmic method that is supposed to give you a set of numbers that will win you a lot of money.

Just imagine if this was true and thousands of people bought the same system and used it on the same lottery. The jackpot wouldn’t spread around very far would it.

If you look at the same disclaimer above, I’ve also underlined a section which every potential customer should read. Even though you may not be able to read this in the above image, it clearly states ‘customers will not win the lottery, and you should not expect to win the lottery by purchasing Richard’s Lotto Processor or following the program. These testimonials do not reflect the typical user’s experience‘. As we already know, Lotto Processor is the same system as My Lottery Loopholes.

You will find lots of good reviews for all of these lotto systems created by Richard Lustig. The reason for this, is because he pays good commissions for promoting it.

I’ll still add an affiliate link down the bottom of this My Lottery Loopholes review, but I would rather you didn’t purchase it. I don’t recommend this product, and will not endorse it.

Having done a bit of research on Richard Lestig and his lotto systems, I came across this report that basically discredits Richards system. I tend to agree with the report, because you never hear of how much Richard put into each bet, other than to say the profits from previous winning should be invested.

It also states that once you finally win with a sequence of numbers, don’t use those numbers again because they’ve already won. This basically means you are choosing a different set of numbers that are NOT random, they are chosen from elimination. The thing with lotteries though, they ARE random. So the same numbers have just as much chance of coming up again.

Will You See Results With My Lottery Loopholes

Sure, you may see a win here and there. But only as much as you would if you don’t buy My Lottery Loopholes. The chances are the same and your odds of winning will not be diminished if you don’t buy this system.

Having researched many reports on Richard Lustig and his lottery systems, it’s clear that money can and will be made with this system, but that doesn’t mean you’ll make a profit. The reason being, as I’ve already suggested, you’re told to invest much of your winnings back into more lottery entries.

What hasn’t been exposed though, is the amount of money that has been reinvested into more lotteries to win future prizes. Many sceptics believe a large portion has been used to purchase more lottery tickets, which is how Richard claims to win more often.

In my opinion, this is not a tactic that is going to win you money very often (as a profit), and is certainly not sustainable.

You want to make money that doesn’t consist of a traditional job, or working for ‘the man’. You wan’t an income that is scalable depending on how much time and effort you put into it. Then why not consider building yourself an online asset that brings in money.

Similar to this website of mine, you too could build a blog that is profitable for the foreseeable future. You can learn about this by reading my Beginners Step by Step Guide to Affiliate marketing, or read about the platform that taught me everything I know about this industry.

I hope this ‘My Lottery Loopholes’ review has given you a little more of an insight into what you can expect should you purchase this system. I don’t believe it will help you win the lottery and make a profit in doing so.

If you have any comment to make in regards to My Lottery Loophole or any of the other aliases it goes by, feel free to leave a comment in the discussion section below.