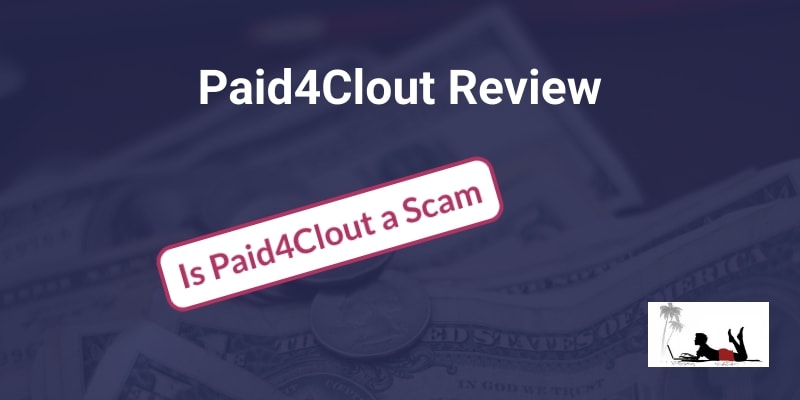 Well, at least this scam has gone to a little more effort than the last few I’ve reviewed. Not that it’s difficult to do, because the last few scam sites have been appalling.

Anyway, this Paid4Clout review will hopefully open your eyes to the unethical extents that people go to, just to access your personal data. In fact this is the second attempt (if not many more) at trying to grab your information for these guys. They used to have a site called CloutPay, but this site now gets redirected to Paid4Clout.

That’s just what happens then a scam gets exposed, they open up a new shop. So let’s get stuck into this Paid4Clout review.

Program Summary: In my opinion, Paid4Clout is not a legitimate site, they are only interested in obtaining your personal information. Give this one a miss.

Let’s first take a look at the Paid4Clout website, and see how you’ll apparently benefit from their service.

For authenticity, they say that Paid4Clout was founded in 2015. I’m going to refute this a little later, and will give you proof that this is not the case. They say their main goal is to ‘help as many people as possible change their lives by taking advantage of social media’. They don’t actually give you an example of how this will be achieved, so I’ll give you an example shortly.

Paid4Clout also suggest that they will pay good returns, claiming they ‘don’t try to cut you short by paying you pennies’. You’re paid ‘what your traffic is worth, which is ALOT’. So, no matter whether you have 100 or 100k followers, virtually anyone can earn.

Unfortunately, I’ve seen multiple websites setup like this, and just about all end up the same way. That is, not paying out their partners for achieving the results that they’ve been asking for.

Now I’ll explain what is going to happen should you sign up.

Okay, now an honest assessment of what paid4Clout is really about. You’re going to find this is basically a replica of another apparent money earning site called Influearn. Which is also similarly cloned from Clout Bucks and Viral Dollars. They are all very similar on the inside, and DO NOT pay out to any members.

I believe there are a few people close to the owners that make positive comments of the program on sites like mine. (We expose these sites for what they really are). However, I’ve never yet seen absolute proof that anyone has been paid out.

I have however, seen many complaints of people that haven’t been paid out from these cloned websites. Which really doesn’t surprise me when you take a look at the business model. First. a snapshot of some recent comments of CloutPay, the original name of Paid4Clout.

Doesn’t look too promising does it.

As far as the business model goes, Paid4Clout claim you’ll get $25 just for signing up. Who on earth could possibly offer you that. Where are they going to get enough money to pay every member $25 straight up? This is just not possible.

Now, on the inside of Paid4Clout, you’re going to find a nice looking membership area. But don’t be fooled, this looks better than it actually is.

You will find the Typical ‘Task Wall’, which displays tasks that you can complete. Which is generally signing up to external offers (which possibly makes the owners of Paid4Clout commissions).

They are attempting to get you, to entice your friends and family signed up with Paid4Clout. Which brings me to the whole point of these sites.

What Does Paid4Clout Want From You

And you’d be helping them, by referring your social media contacts. This is done through the Promotional Posts and YouTube submissions. You will be inadvertently directing your acquaintances on any social media platform you use. This is a great way to lose your friends.

How Much Do Paid4Clout Pay

This where you’re initially going to be lured into Paid4Clout, and then disappointingly letdown. Paid4Clout offer a monetary figure for various activities. Here’s a snapshot of their payment incentives.

The most difficult of all these is to create a YouTube video, which is why they put a higher figure on this option. Imaging how much exposure they can get with people creating YouTube videos promoting Paid4Clout.

When it comes to being paid out though, this is where the real issue comes. CloutPay never paid out, and Paid4Clout also does not pay out. To get out of making payments, they use a disclaimer within the members area. It says ‘WARNING! When confirming payments, if our team finds any fake referrals/clicks, your account will be banned and your payment will not be approved’.

This seems to be the catalyst for not paying anyone that attempts to withdraw their accumulated funds.

There’s several red flags that concern me with Paid4Clout. Here’s a few more indication that suggests that this program is a scam.

As I stated earlier, Paid4Clout claims that’ve been around since 2015. This is quite contradictory to what I’ve discovered. Whenever I sniff a scam, I do a domain check on the site. And this is what was revealed when I checked how old paid4clout.com is. 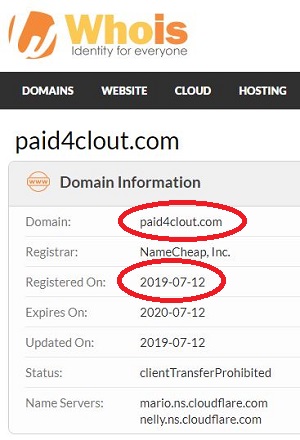 Unlike Clout Bucks or Influearn, Paid4Clout goes to the effort of paying spokespeople to create a testimonial. These people have not used Paid4Clout, they have been paid a few dollars to take a short video of themselves, to give the assumption they have used Paid4Clout.

Here’s a snippet of two of the testimonial spokespeople.

And below are their profiles on an outsourcing website called Fiverr.com

As you can clearly see, these are the same guys claiming to have made money with this system. If a program cannot even get legitimate referrals, they obviously have no content customers.

Another interesting fact is that the ‘Blog’ page still have remnants of the CloutPay predecessor. It even has the CloutPay logo.

So, their proofreader has forgotten to amend the logo after copying the site to the new domain of Paid4Clout.com. Whoops!

Will You See Results With Paid4Clout

I’m extremely confident in saying that the only results you’ll see with Paid4Clout, will be poor results. You will get the impression that there is money to be made here, but the reality is quite different. You’ll have an accumulated amount of money displayed in the members area, but you will not be able to make a withdrawal.

When you do attempt to do this, you’ll receive a message stating that your account has become fraudulent, and they will not pay you out.

Unfortunately, you will have also compromised your personal information. Not only that, if you’ve referred other people to this site, their information is also in jeopardy.

Clearly, I’m not an advocate for Paid4Clout. In my opinion this is not your golden ticket to a wealthy future. To be totally honest, I don’t believe getting paid to complete trivial tasks and surveys are going to make you that much money anyway, even from the more legitimate companies like Qmee.

In the case of Paid4Clout however, you will not get paid at all. This program is a scam, and you’d be better off searching elsewhere to make money online.

While platforms like this are attempting to lure you in because they say you’ll make money with little work, the reality is different. There ARE opportunities to make money online, but you do require a bit of effort.

Nobody is going to offer you a legitimate program to make loads of money on autopilot. There’s loads of programs that say they will, but once you sign up, you’ll find the reality of the situation. Upsell after upsell, which are going to give you a better chance of success, and end up costing you a lot more than you thought. Unfortunately, these types of products are usually flimsy and poor quality.

I’ve been where you are, looking for that ideal opportunity to make a living online. In my situation though, I’m a bit of an introvert. I’m not interested in conversing with new people and setting up meetings. I wanted an opportunity that would allow me to work on a laptop, and possibly work remotely so I could travel more.

Affiliate marketing has given me this opportunity. While it’s not the only way to make money online, it’s the model that suited me best. Basically, I promote products to people, and should they click on that product, they will be taken to the website where the product is sold. If they make a purchase, I make a commission on that sale. It’s a simple philosophy, and anyone can learn to do it.

Even better, they may purchase more than the initial product, in which case I make commissions on all the products they buy.

If you think this would suit yourself, you can read my Beginners Step by Step Guide to Affiliate Marketing which will explain the process more in depth.

I certainly hope I’ve alerted you to the scam that is Paid4Clout, and preferably before you’ve signed up. I appreciate you reading my Paid4Clout review, and doing your due diligence. This is a step that many people fail to do, and they end up getting scammed.

All the best in your future endeavours to make money on the internet. It can be done, but you may need to change your mindset from earning lots of money quickly (those opportunities are all scams), to a consistent income over time.

To learn more about how you can build your own profitable online asset, read on below.