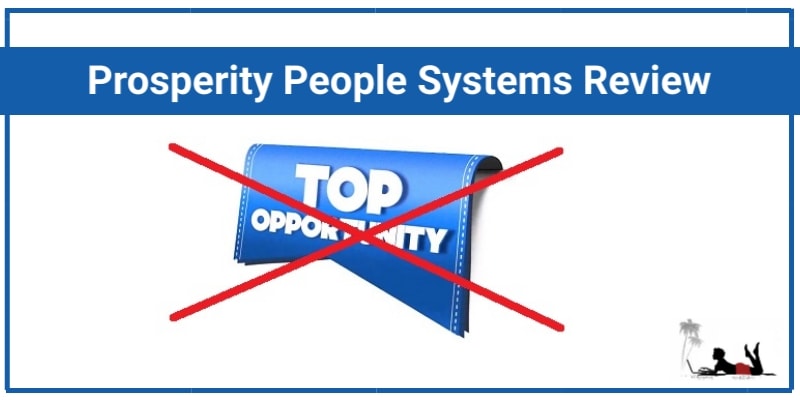 You’re probably wondering if this is a legitimate opportunity to make money, or another money sucking program. Let me begin by saying that yes, this is a pyramid scheme and your changes of making money are next to nil.

I’ll provide you with what you need to know in this Prosperity People Systems review, and let you decide if it’s worth placing your money within.

Program Summary: In my opinion, this is a pyramid scam that will happily accept your payment, but returns will not be as forthcoming as you’d expect.

What is Prosperity People System

The presenter of the video does not say who he is, which immediately makes me suspicious. I’ll touch on this and other concerns a little later.

You’re going to hear some big claims from the presenter, such as making huge amounts of money in small time frames. He claims that he’s made $204,500 in less than 4 months. I say this is BS, and they are just stating this to get you interested. Although I wouldn’t actually call it an investment, more of a scam.

Now, apparently you need to be invited by an active member to join this system. By this they just mean you need to have clicked on a referral link, which people will have plastered over social media.

How Does Prosperity People Systems Work

So you may look at Prosperity People Systems and consider it an MLM, but there are no actual products circulating. It’s just a money circulating system that will eventually dry up.

If we take a look at the compensation plan, you can see there are 4 levels of participation.

The smaller you invest, the less money you’ll make. So, obviously you’ll be encouraged to invest the highest amount possible, being $7,500.

The returns you’ll receive will all depend on the amount of referrals you get yourself. So if you cannot get any referrals yourself, there is no money coming your way.

The problem with this kind of pyramid system, is that there’s always a tipping point where there are no longer new members investing in the system. This is where the money dries up and no funds are being distributed. This is also why pyramid schemes are illegal in many states and countries.

Is Prosperity People Systems a scam! I can’t be 100% sure, but there’s a few major concerns I have that you should pay particular attention to.

No Ownership
At no point anywhere in the sales page or video does the spokesperson say who he is. There is no indication as to who is behind Prosperity People Systems, and they even say in the sales video that this is not a company or business. So what is it, a handshake agreement. If so, I’m out!

Testimonials
Having sat through the video testimonials, I’m convinced they are fake. By this I mean that you can easily outsource these kind of testimonials through outsourcing websites such as Fiverr.com.

After all, who on earth is going to realistically post thousands of dollars cash in an envelope these days. That’s what you’ll see in the testimonial video.

Commonly, you’ll be encouraged to sign up to a program before they close the doors. Apparently, there’s just no way they can hold this offer for you indefinitely. This is rubbish. I’ve been back to the site over 2 months later and the same opportunity presents itself.

So let’s assume for a minute this is a legit opportunity. If you were to go to any of your friends or family and advise them to sign up, would they! If I was investing this amount of money into a non proven system, I’d be wanting to know who is behind it, and be sure there is an income disclaimer to see previous results.

Once you’ve asked your personal acquaintances and they’ve declined, you’ll be left to use social media to push out your invitation to Prosperity People Systems.

Now, About That Traffic

So, as you hear in the sales video, you’ll be provided with a replica website to the one you signed up from. Anyone that visits this website will view the same presentation. Then the spokesperson says he’ll show you how to get Google to send people to your website 24/7 without spending a dime.

I find this interesting, because the only free traffic that Google will give you, is search engine traffic. You know, the search results pages when you Google something of interest. The thing with SEO (Search Engine Optimization) traffic, is that it takes months or even longer to rank highly enough to get any sort of traction.

I had to search long and hard to find any replica websites, but I did find two.

Would I Recommend Prosperity People Systems

In a word…No. In my opinion, this is either a circular money pyramid system that will not last very long, or it’s a scam. In either case, you’d be lucky to see your invested money again. You making any money relies fully on getting other people into this system, which is fairly slim.

You’re obviously reading this Prosperity People Systems review because you want to make money. Don’t we all! Unfortunately, systems like this are all too common on the internet. They make huge claims of wealth to get you in, only to be disappointed when reality sets in.

If you’re after a genuine opportunity to make money online, I can provide a couple of options. Money can be made online, but you have to put in some effort. The great thing is, once you have put in the effort to build yourself an online business, it can become your career. No more working for the man!

Alternatively, why not try and set up your own online eCommerce store. Here’s a link to learn what dropshipping is and how it makes running an online store so much easier.

← How to Dropship Watches (Learn to Run an Ecom Business!) What is Push Button Money System ($5K in 24 Hours Seriously!) →

Organic Traffic Formula by Spencer Haws: Would I Buy
Who Is The Top Expert For Teaching Funnel Building
Best Payment Method For an International Amazon Affiliate