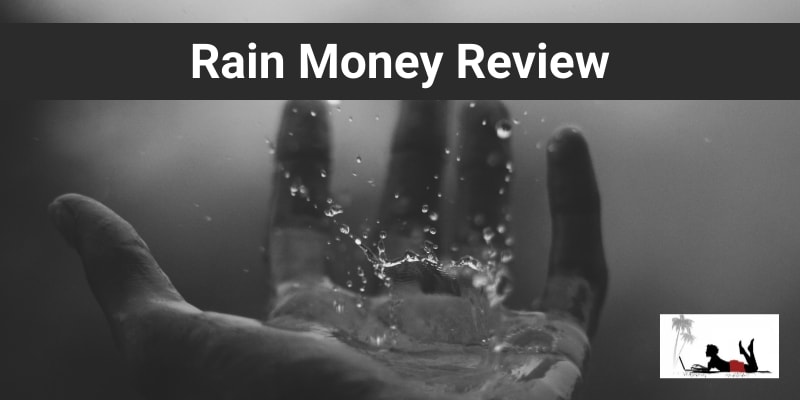 You may have been alerted to Rain Money via social media sites such as Facebook, which is where I first came in contact with it. Somebody is attempting to gain referrals to Rain Money, in the hope they receive a commission. Unfortunately, they will not get paid, and I’ll get into that soon in this Rain Money review.

If you’re looking for a short answer, then yes, Rain Money is a scam. I’ve reviewed other programs that are replicas of Rain Money, and they all have the same features in common. I’ll be discussing all this within this Rain Money review, so let’s get started and see why you should not be signing up to Rain Money.

Program Summary: In my opinion, this is a scam. I’ve reviewed multiple sites that are clones to Rain Money, and they do not pay out their members.

What is Rain Money​

What would make you immediately sign up to a website, that will claim to make you money? I bet a $25 bonus just for signing up would do the trick. Sign up, take the money and run hey! Well it’s not that simple, as I’ll show you.

What Rain Money claims to do, is offer you income bonuses for completing simple tasks and referring others to the same site. These tasks include the following:

Each of the above will allegedly earn you $30.

Then there’s the Promotional Posts. This is a collection of banners created to promote Rain Money on social channels.

One of the biggest time wasters that you’ll be encouraged to do, is create a video and upload it to YouTube. You’ll be advised that each referral you get via any of these social channels, will net you $10 each.

So you also have the option to upload banners or get your affiliate link out via Instagram, Facebook and Twitter, along with the other social channels I’ve already noted. The code that you’ll be adding to your promotions, will offer the ‘$25 sign up’ bonus. This is the big lure to get people in.

Here’s a view of what you can expect on the inside of Rain money. 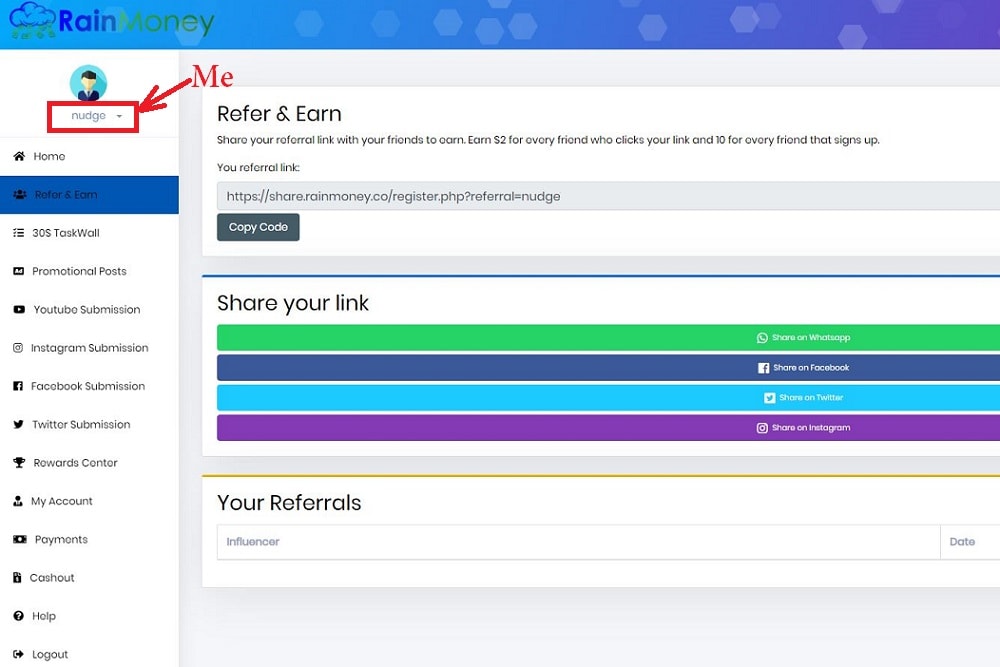 How Does Rain Money Work

The main purpose of Rain Money is to get as many people as possible to sign up as a member. When this happens, the information you pass over in the signup process is then stored within the database of Rain Money.

When you complete tasks within the dashboard, extra information is given forth, such as phone numbers or physical address details.

So as you can clearly see, Rain Money is a data harvesting site that collects as much personal information as possible. This information can be used in various ways, including being sold to third party platforms.

Also, whoever is behind Rain Money (and their other aliases), will earn commissions every time you complete a task to an external site.

So, what will you get paid?

Will You See Results With Rain Money

Although the documentation inside of Rain Money says you will get paid for various tasks, Rain Money will not pay out. You will note when you sign up, there is a disclaimer that states you will not be paid if your account finds fake referrals or clicks. This is how they get out of not paying you.

In fact I’ve even seen YouTube videos that expose Rain Money as being a scam. The person in the video below has been scammed, and is warning others against signing up.

As you can see in the above video, there is a threshold limit that you need to reach before you can withdraw any funds. This is set at $200, which gives enough time for unsuspecting victims to promote Rain Money all over the internet, before finding out that Rain Money will not pay out.

You can also see that it’s not possible to signup and withdraw your $25 bonus. When you think about it, who on earth would offer you $25 just for signing up anyway. No company can make money from doing this, which is why it’s a false promise.

There’s several indications that alert me to this scam, not least that I’ve seen the same site cloned under different domains. So pay attention, and have a good read of this.

There’s loads of domains that are popping up recently, all of which have the same attributes. Many are clones of Rain Money, such as Paid4Clout, others like WeeklyHourJob, Cashload and Paycate look different, but serve the same purpose.

These sites all offer the same features like completing tasks, filling out surveys and referring others through Promotional Posts and YouTube videos. All show the same warning that you won’t be paid if their team finds fake referrals or clicks, or fraudulent activity.

They won’t pay you out, and use their ‘Fraud Policy’ to get away with it.

Here’s a blatant lie for you. Rain money claim they were founded in 2013 to help regular social media users turn their usage into money. You can see this claim on their ‘About Us page.

So what seems extremely odd is that the Rain Money domain name was registered in August 2019. You can clearly see this if you look it up any domain domain registration site such as ‘Whois’, which I did. You can see the results for yourself below. 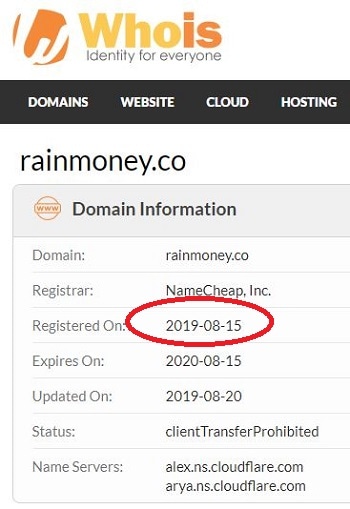 So what’s happening here is that when one domain gets exposed as a scam, they simply register another domain, change the title, and release the same scam again.

Testimonials are what helps raise authority, except when they are fake. I’ve mentioned this on other reviews, and proved they are fake. The same is happening here.

Here’s an instance of one of the ladies they have used for a testimonial. As you can see, I’ve found her profile on Fiverr.com, an outsourcing website where you can hire spokespeople for a minimal cost.

So, Rain Money (or whoever is behind Rain Money) has paid this lady to claim she’s used the product and made money from it. If you look at her eyes in the video, she’s always looking down at her notes to see what’s on her script.

Using testimonials is not new, but paying people to claim they’ve used a product when they haven’t is unethical. It’s a common tactic that scammers use.

The Rain Money homepage will show you ‘Happy Members Testimonials’. These are all fake, and they get change around and modified throughout their cloned websites sites. For instance, I’ve reviewed another replica site called Influencer Cash. If you check out this review, you’ll notice I’ve highlighted ‘Cristina Richards’ claiming she’s used all these cloned sites to make money.

Funnily enough, this profile image has also been used on the KashTree website, another replica scam site. However, this time she’s called ‘Ambria. N’. The image of this lady is a stock image that they’ve gained access to. The testimonial wording is just modified to suit the new site they introduce.

Is Rain Money a Scam

In my opinion, Rain Money is an absolute scam. They have taken people for a ride on their other cloned domains, and now they are preying on more unsuspecting victims with the Rain Money domain.

Should you join up and begin completing the tasks and surveys, you’re more likely to have this site rain on your parade. There is no evidence that this site has paid out anyone, yet there is evidence that they have refused to pay out.

Rain Money claim to work with big brands such as McDonalds, Burger King and Target, but I didn’t see any evidence of these brands anywhere when I signed up to check it out.

In my view, you should be looking elsewhere if your in search of making money online.

If you’ve landed on this Rain Money review because you’re in search of a method to make money online, I’m afraid you’d be disappointed. I understand the predicament you may find yourself in, needing extra money just to get by.

I was in this same situation a few years ago, until I realised what I didn’t want to believe. I always hoped there would be a quick solution to making money online, but as much as I searched, I kept finding illegitimate programs that offered the world, yet produced nothing of substance.

Eventually I realised I needed to knuckle down, and build my own profit producing website. This is something that nobody can take away from me, and I can expand it to the size that suits me. That means if I want to work harder on this website, I will earn more money. The less effort I put in, the less results I’ll see.

I’ve learned how to build this website and make it profitable. I would have struggled to do it on my own, I required guidance. Luckily for me, I found the best affiliate marketing training platform on the web. Not only have they taught me just about everything I needed to know, they have a huge community of support with expert affiliate marketers willing to help.

I’m still an active member there, and if you’d be interested in learning as I did, I’ll help you out. Here’s my review of this brilliant platform.

1 Month Business Builder - One Funnel Away Challenge
What is Affiliate Funnels (Is It Value For Money)
Deep Inside The Underground SEO Secrets: Ruan Marinho Expert Insights