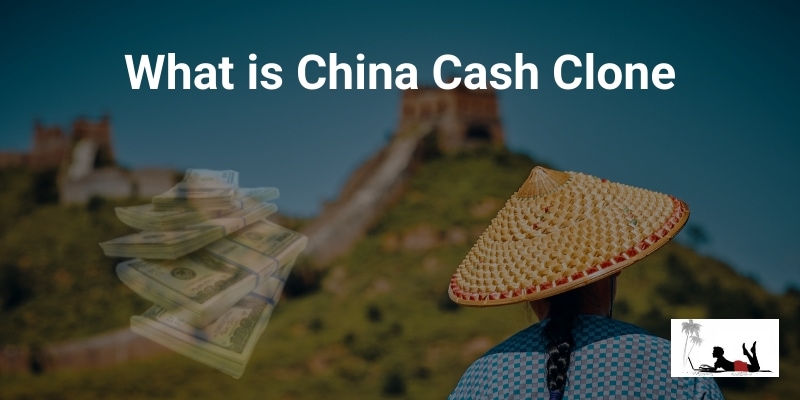 One of the more recent products I’ve seen doing the rounds is called the China Cash Clone. You may have seen it advertised or had a link sent to you via email. If this is the case, there’s a good chance they may have grabbed your attention, because the claims of big money are enough to get anybody thinking.

This gentleman named ‘Daniel Barber’ claims you can make up to $5,000 on same day you get started with China Cash Clone. I can tell you now, this won’t be happening. So, what is Chine Cash Clone, and what can you expect will happen should you invest in this product?

As I have no affiliation with Chine Cash Clone, I’ll give you an honest appraisal from someone that’s reviewed loads of these types of programs. 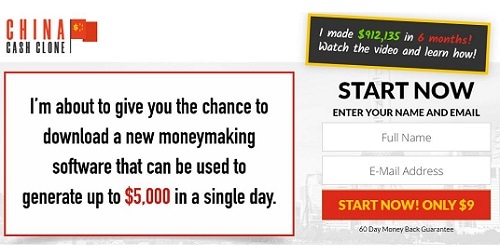 Program Summary: In my opinion, the information you’re provided with, when you purchase this product, is not at all what you’d expect after watching the sales video. The claims of quick wealth contradict the reality, which I believe makes this a scam.

What is China Cash Clone​

Well, what you’re led to believe China Cash Clone is, conflicts the reality of what you’ll actually receive. So let’s start off by taking a quick recap of what we’re told in the sales video.

So, here’s Daniel Barber, a genuine guy that has a few beers one night and gets scammed by a Chinese businessman. He’s down and out because he handed over $5K to this guy, and didn’t get anything in return. So he heads out for a beer, and luckily enough, there happens to be another Chinese businessman, this one willing to pay for his beer.

Enough about the hard luck story, let’s get to the point. This second Chinese businessman named Mr Fong, gives Daniel a unique software that was being used by businessmen in China to make huge sums of money. Just like that, he’s handed over this system that pays thousands of dollars per day. What a lucky guy Daniel is don’t you think!

Even better, you can buy this program for only $9 bucks. How lucky are you! So what does this program do, and how easy is it to use? Well, apparently you’re being given a software program that can be used to generate up to $5,000 in a single day.

Now supposedly, this revolutionary software works by exploiting a little-known glitch in the internet. Ahh..what! Never mind that, it will allow you to clone the exact method that thousands of people in China are using to get ‘mega rich’! All you’re going to require is a laptop, internet connection and a desire to make a fortune online.

Now all you need to do is follow what the software is telling you, and you can make up to $5,000 in a single day. All this sounds absolutely amazing doesn’t it. In fact Daniel even has the gumption to claim that ‘most of our existing members decided to jet off to somewhere sunny within the first two weeks of signing up’. What total BS! Now, let’s see what’s really included if you buy this $9 product.

How Does China Cash Clone Work

Daniel claims he’s giving you the ‘Golden Ticket’ to making $30,000 per week with this software. Don’t believe it, because the truth couldn’t be any further removed.

So in reality, you’re going to be given access to the members area of China Cash Clone. Within this members area, you’ll be granted access to some basic training videos on how to setup an eCommerce dropshipping website. You weren’t expecting that were you.

In fact it’s all a little sporadic, as the VIP member Workshop gives you a link to another program altogether. It says ‘Register for our ONE OFF Live VIP members workshop where internet millionaire John Crestiani will be showing you how to get started earning profits immediately’. What this has to do with the remainder of the training, I don’t know. That’s because John Crestiani teaches affiliate marketing, not eCommerce.

So back to the eCommerce training. You’re given 5 short videos that explain the basics of how to setup an eCommerce website through WordPress. Are these videos any good? Well, in my opinion they are correct in what they attempt to portray. However, there’s no way you’ll build a build a successful eCommerce business from 5 flimsy videos.

Oh, and not that you can’t create an eCommerce website in WordPress, but in my opinion the easiest way is through a dedicated eCommerce host such as Shopify or BigCommerce.

I’ve created an eCommerce store in the past, and there is way more to it than what these videos show. Sure, anyone can be successful by setting up an eCommerce store, but I suggest you need the correct training. I’ve taken Adrian Morrison’s eCom Success Academy, the top eCommerce training platform on the internet. This course has over 160 videos and costs closer to $2K. That’s why it’s the best.

The other reason it’s the best, is because the course explains how to use Facebook advertising to get store traffic, and also shows you how to manage the other aspects of store management such as customer service, dealing with returns, sending invoices and follow-up sales. Other courses tend to miss this information.

What The Training Does NOT Provide

Because the training is so basic, it misses so many aspects of how to run an online store. Anyone can set up an eCommerce store, this is the easier part. Once you have this set up however, how do you expect to get website visitors?

China Cash Clone conveniently excludes how you’ll get traffic, because it’s the most difficult part to any online venture. Let me explain.

In a similar way, search engine traffic can also take a reasonably long time to rank in the search results. The other option is paid advertising, which is risky, especially if you’re new and are unsure of what you’re doing.

There’s 2 upsells with China Cash Clone which are listed below:

Will these upsells help you? In my opinion, not really. Of course you’ll be encouraged to purchase these upsells, because the base product will only get you so far (which is not very far).

Of course, like so many other products similar to this, there are a few indications that alert me to the fact that this is not all that it seems. I’ll run you through a few of the concerns that I have, and red flags that indicate its a scam.

They attempt to make this disclaimer as small as possible without being unreadable. The reason for this, is because they state your chances of making money with China Cash Load. I’ve blown it up a little for you, so you can take a good look. It clearly states, ‘The typical purchaser does not make any money using this system’.

I don’t think you need any more evidence than that to prove you won’t be making a dime with this scam.

Products like this often outsource testimonials to people from Fiverr. These people have not used the products at all, they are just spokespeople that claim to have used the product. They’ll be paid a few dollars for creating this testimonial.

If you’ve watched the whole sales video through, you will have seen this guy claiming he’s made thousands of dollars with China Cash Code. In reality, he’s been paid a few dollars for his services.

Need more proof. Here’s another one of the testimonials. This girls has also made a fake testimonials for The Million Dollar Replicator & Viral Dollars, 2 other recent scams.

Each of the testimonial actors are spokespeople that are offering their services on Fiverr. In other words, they are fake testimonials.

It always pays to be skeptical when researching a new program, especially when it claims you can make huge sums of money for little effort. Which is exactly what this program does.

So, I checked the date that this website was registered. As you can see below, the Whois information which provides the registrant details, shows China Cash Clone being registered on the 17th March 2019. 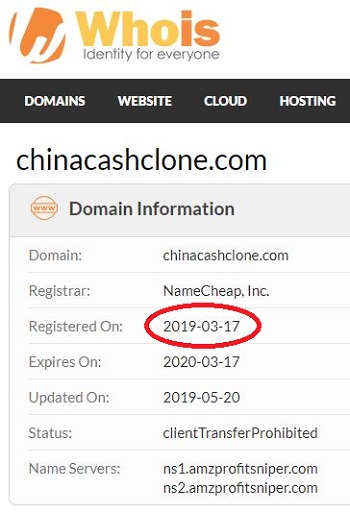 Now, don’t you think it’s odd that these testimonials below have apparently joined China Cash Clone between Aug 2018 – Oct 2018. The site wasn’t even registered at that time!

This confirms that the testimonials are purely fake.

If you were coming here to read a positive review of China Cash Clone, I cannot provide this. The product inside will NOT allow you to make $30,000 per week from less than 10 minutes work per day. This is just unrealistic.

Whether you’d call it a scam is debatable. You do actually get a product, being some basic training videos on eCommerce. However, starting an eCommerce business takes a lot more work than 10 minutes per day.

I’ve mentioned that setting up a dropshipping online eCommerce store certainly is achievable, but there’s many aspects to this online business and the management behind it needs to be taught, along with your traffic sources.

How To Really Make Money Online

It would be ideal if programs like, what China Cash Clone claim, were actually real. Unfortunately, there are many people out there slapping together very poor quality products, and selling them with a sales page that is way overhyped.

I do have some good news though, because I can possibly offer you a legitimate way to make money online. There is no BS involved, and I won’t be telling you that thousands of dollars will be pouring in the door within a months time with little work.

No, you have to put some effort into it. Nobody is realistically going to offer you a method to make loads of money fast, but you can make money for your long term future with this model.

You can read my Beginners Step by Step Guide to Affiliate Marketing here, which will show you a sustainable way to make money online now, and into the future.

I’d urge you to be a bit more realistic in your approach to making money online. If you’re constantly looking for money making opportunities that will bring in thousands of dollars fast, then you’ll keep being presented with these types of scams.

Money can be made online, but you need to build a following, an audience, a website or social channels with informative content. This is how people like myself make money online. I’m an affiliate marketer, and if you’d like to learn how to do this, keep reading on below.

← What is Compoundly (3 Simple Steps to Profits - Really!) Is Elepreneurs a Scam (Or Lanes of Opportunities!) →